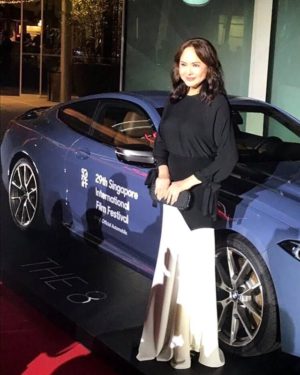 THE HORROR movie “Eerie” made its world premiere at the Singapore International Film Festival at Capitol Theater in Singapore on Dec. 3.

Lead star Charo Santos-Concio updated her Instagram followers and shared photos of her with the film’s director Mikhail Red and fellow stars
Jake Cuenca and Bea Alonzo during the event.

“Thank you to everyone who came to watch,” she said.

Last week, ABS-CBN announced that “Eerie” is one of the 2019 Philippine movies under Star Cinema.

It features Santos-Concio as a mother superior in an all-girls school.

The movie marks the actress’ return to the horror genre after “Itim” in 1976.

Just like Santos-Concio, Alonzo shared photos and videos taken at the world premiere on her Instagram stories.

One of the photos was at the media interview with Cuenca, Santos-Concio, and Malou Santos, retired Star Creatives chief operating officer (COO).

Another video taken was when Alonzo answered a question from a reporter explaining her role in the movie.

Alonzo plays a nun and guidance counselor at the same school where suicides have happened.

Upon investigating the incidents she unravels the mystery.