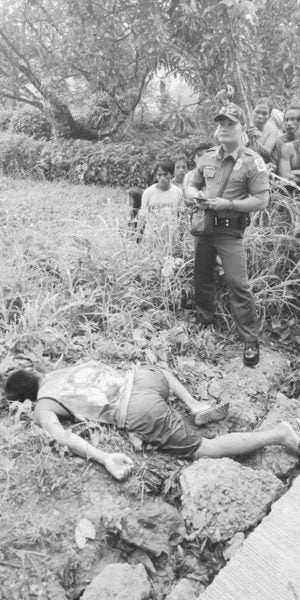 The body of a man was found dumped in Purok 7, Barangay Bunga, Toledo City on Thursday morning, December 6.

Korret added that Laborde is said to be a habal-habal driver.

Korret said that the victim had multiple gunshot wounds on his body.

A concerned citizen visited the police station past 7 a.m. today (December 6) to report the discovery of the still unidentified body which was dumped along the road in Purok 7.

Korret said that residents in the area saw a vehicle coming from the direction of Barangay Das, Toledo City pass by their area between 11 p.m. on Wednesday to 12 midnight on Thursday.

He said that the vehicle stopped for a while at the same spot where the body was found.

The vehicle driver then headed for Barangay Lamac in the neighboring Pinamungahan town, Korret added.

Read Next
Three jailed for possession of P5.2M worth of shabu