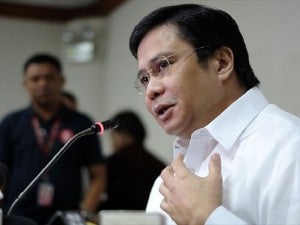 MANILA, Philippines — Former Senator Jinggoy Estrada on Friday said he hopes his fate would be the same as that of former Senator Ramon “Bong” Revilla Jr. who was acquitted of plunder charges by the Sandiganbayan in relation to the multi-billion pork barrel scam.

Estrada said he hopes that the anti-graft court would decide similarly on his pending plunder case but said he doesn’t want to “preempt” the decision of the Sandiganbayan.

Asked by reporters if he thinks the anti-graft court would also acquit him on his pending plunder case: Estrada said he hopes so.”

“Well, I hope so. Sa kaso ko, I do not want to preempt the decision of the Sandiganbayan,” Estrada said.

The anti-graft court First Division acquitted Revilla on his P224.5-million plunder case related to the pork barrel scam on Friday.

Estrada said he is “very happy and elated” for Revilla’s acquittal.

Revilla and Estrada along with former Senator Juan Ponce Enrile were the so-called “PDAF-scam senators.” They are all running for Senate in the 2019 midterm polls.

Estrada is currently out on bail.

Read Next
Kasadya sa SRP to open on Saturday