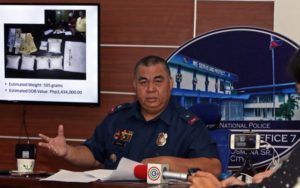 At least P16 million worth of illegal drugs were confiscated while more than 200 individual were arrested in the One Time, Big Time (OTBT) operation of Police Regional Office in Central Visayas (PRO-7).

At the same time, three suspected drug peddlers were killed in what police said was a shootout during the 48-hour OTBT operation.

“They resist the arrest. We conducted it all over the region but these three, they’re the only ones who resisted arrest,” said Sinas.

The police in the region conducted 114 buy-bust operations, served 81 search warrants, and warrants of arrest.

During these operations, they arrested 245 individuals for illegal drugs, illegal gambling and illegal possession of firearms.

Some who are in the most wanted list were also detained.

The operations conducted by the Cebu City Police Office (CCPO) yielded the highest haul of illegal drugs valued at P13,000,590.

CCPO Director, Senior Supt. Royina Garma said that they were able to confiscate almost two kilos of shabu in the city.

Garma said that they noticed that the shabu they confiscated has two kinds, one yellowish and the other white crystalline-like.

Most of the arrested drug peddlers also served as “bodegero” (custodians) of these shabu, Garma said.

Meanwhile, Sinas said that one of the highlights of their operation was the confiscation of loose firearms.

He said that there were 111 loose firearms confiscated while 28 firearms were surrendered.

However, Sinas said that they failed to arrest an incumbent barangay captain of Tuburan town for owning unlicensed firearms.

Amatugan Barangay Captain Braulio Umandac remained at large after the police implemented a search warrant against him.

“We received reports that he (Umandac) owned many unlicensed firearms. We were able to recover from his house but we failed to arrest him,” said Sinas.