CDN, Freeman off to hot starts 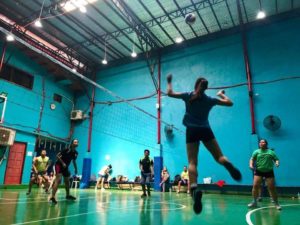 Cebu Daily News (CDN) and The Freeman (TF) were successful in their opening games in the inaugural Veco Media Volleyball Cup on Sunday as both chalked up thrilling victories at the Harou Iwanaga Gym in Urgello Street, Barangay Sambag I, Cebu City.

“The tournament, the second this year, is a way for the Cebu Media Volleyball Club CMVC to promote sports and healthy living among journalists and media workers in Cebu” CMVC Founder and The Freeman Online Editor Joeberth Ocao said during his speech to officially open the tournament.

Other teams who are joining the volleyball competition are Kapisanan ng mga Brodkaster ng Pilipinas (KBP), DYHP, and Veco.

The tournament will be following a single round robin format both for the elimination and semifinals.