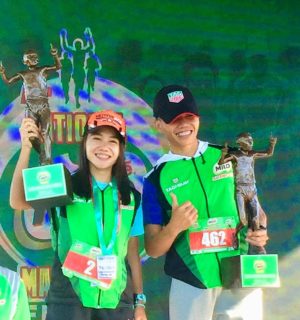 What everybody saw was an easy win for Cebu’s “Marathon Queen” Mary Joy Tabal.

But the Olympian saw it as one of the toughest she has ran ever.

The 29-year-old Tabal proved she is still the best in the country when she bagged her sixth straight National Milo Marathon women’s title on Sunday in Laoag City, Ilocos Norte but she wasn’t quite impressed with how she accomplished this feat.

“I am not a hundred percent satisfied with my performance,” Tabal told Cebu Daily News.

Tabal revealed that her time of two hours, 56 minutes and 31 seconds was her second worst time, just a few minutes behind her worst 42k time of 2:58.01 that she logged last year in the same race. But her slowest time was because she was going through a rough time after her dad passed away a day before her race.

With her performance this year, Tabal said she needs to reassess herself especially since she is preparing for two major races next year; the Olympic qualifiers in Tokyo, Japan, and the Southeast Asian Games in Clark, Pampanga.

“As an elite athlete, I always aim high. I always set my goals for the best but I did not accomplish it yesterday because the race was just too tough,” she said.

Tabal had some reasons, though.

“There are a lot of bumps, the race course was dark, and there were parts that there was rough road. So it was a tough race in terms of the race course. But overall, I am very happy because I crossed the finish line safe and free from injuries,” said Tabal.

Because of the challenges, Tabal said she and her trainer, John Philip Dueñas had to change their game plan while the race was going on.

“We have to change our game plan so that I won’t get injured because I have major races next year,” she said.

Tabal also shared that she hasn’t quite gotten over the passing of her father just yet, and that played a bit of a role in her performance this year.

“I still remember last year that I was still crying during the race because my father passed away, and I still felt that emotion until now.”

But the win was still enough to give the Cebuana a chance to represent the Philippines in the Southeast Asian Games next year to be held in the country.

Tabal also revealed that she is eyeing the Tokyo Marathon Olympic qualifiers on March 3 and in case she fails to qualify, her second option is to compete in the Ottawa Marathon in Canada where she got her best 42k personal time of 2:43:31.

“Our plan is to start training early. I want to start my training in January. My training will be more on speed because we trained for endurance for Milo Marathon. We are planning to train in Japan,” said the SEA Games 2017 gold medalist.

Read Next
CDN, Freeman off to hot starts