It may be the most opportune time for a tipple. Or two. In this case, four. Not only is it Christmas, the country celebrates its fourth Miss Universe crown with Catriona Gray’s flawless win at yesterday’s pageant. If you’re a little high (pun intended) from her victory (and that prophetic question on marijuana), let’s stick to something completely legal: alcohol. And as our Queen emphasized, all in moderation, please.

If you find yourself on a Cebu Pacific flight to Singapore, indulge in their #PassionMadePossible campaign, take a trip to Resorts World Sentosa, and try these four drinks: 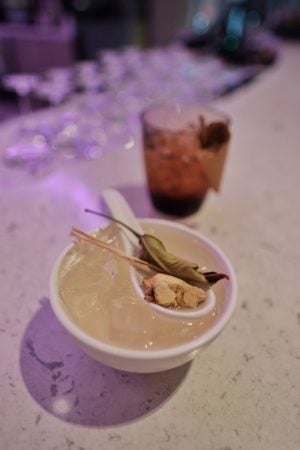 A HANGOVER YOU DESERVE is the alcoholic version of Thailand’s famous tom yum soup. Perfect for our Miss Universe win in that country, eh?

Of course the bartender at the Rock Bar was Filipina. Jennifer just joined maverick new bar manager Anton Gornev, himself an award-winning mixologist, whose first order of business was to roll out an all new drink menu. In keeping with the Hard Rock spirit, the cocktails are inspired by eras of music from the 40s (The Peanut King is their version of the Old Fashioned, served with a waffle cone of peanuts, as a nod to King of Rock Elvis Presley’s infamous peanut butter sandwiches); 60s (Oh, Mommy is packed with umami with a side of miso, yuzo and jasmine with London Dry Gin!); 70s (ahhh, the most inventive one, and the subject of this section, was served in a soup bowl and sipped just like it: A Hangover You Deserve is vodka with coconut liqueur, lime juice, with the ingredients of a Thai tom yum soup including lemongrass, kaffir lime leaf, galangal, tamarind … even bird’s eye chili for heat! This was my absolute favorite in the lineup); and the 90s (What’s My Age Again is a rocked out version of Dry Martini) 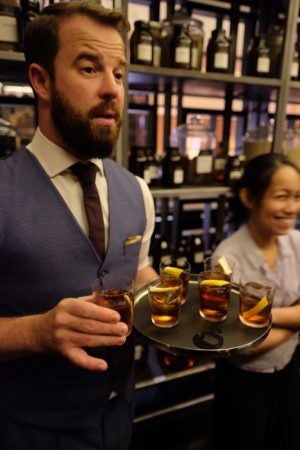 PHILIP BISCHOFF, Manhattan Bar’s manager, and his tray of Negronis, which turn out to be GMA Online’s Lou Albano’s poison of choice! Which might explain the grin.

Of the many reasons why Manhattan Bar is Asia’s No. 1 bar and ranked 3rd in World’s 50 Best Bars, I picked the simplest one for proof of this pudding: a gin and tonic, because if you get this one right, you get everything right. Multi-awarded bartender and manager Philip Bischoff, after plying us with champagne and Negronis, asks me what else I would like to try. After pondering my request, promptly disappears and returns with The Fighting 69th, named after the heroic 69th infantry regiment in New York, again part of the overall theme of the bar’s return to the Golden Age of Cocktails in that amazing city.

Philip’s version is Sipsmith London Dry Gin, chamomile-infused St. Germain elderflower liqueur, Basement bitters, East Imperial Burma Tonic, and served with a single piece of ice … carved with the intricate logo of the bar, a luxurious touch that marks why this particular bar is truly on top of their game. 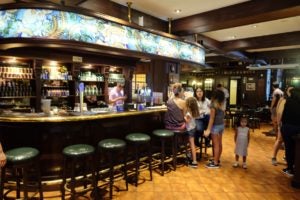 They had me at “you’ll end the tour in our pub”.

For roughly P1,500 per person, a guided tour of the Tiger Brewery is replete with trivia and interactive discussions about beer brewing in the region, including a hands-on demonstration on the proper pouring in order to create just the right amount of foam.

Everyone’s favorite was the pre-recorded last video which has the narrator speaking to the audience as if in real time, clever!
And then you end up at the pub, of course, and the tasting begins. Ah, my kind of tour. 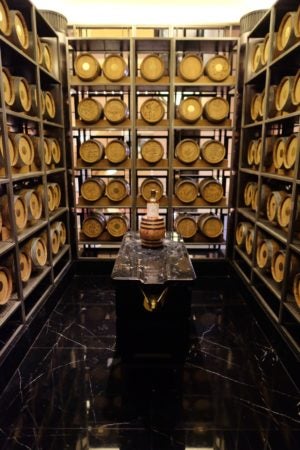 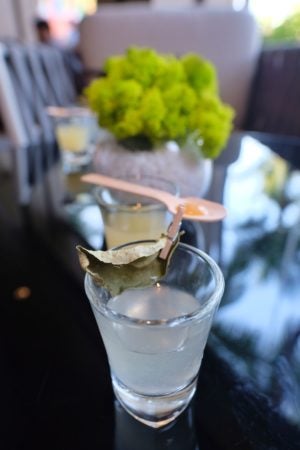 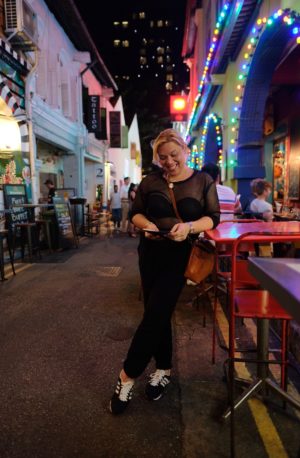 SCENES FROM #PASSIONMADEPOSSIBLE: (clockwise from top, left): THE INTERIORS of Manhattan evoke 1920s New York, also known as the Golden Age of Cocktails with its dark wood, leather, and subdued lighting; A SAMPLER
selection of new cocktails from Resorts World Sentosa’s Hard Rock Hotel’s Rock Bar, every single one from a decade of music; THE OAK BARRELS inside Manhattan Bar’s rickhouse (a storage for whiskey barrels as they age) have the heirloom cocktails transfered from the top barrels all the way to the bottom until they are ready for storage;
EXPLORING HAJI LANE, a few steps from Andaz. Also knows as Singapore’s OG hip neighbourhood, the tiny shops are transported inside the skyskcraper with thoughtful details amid 22nd century creature comforts.

Our hip, design driven hotel Andaz (a concept hotel of the formidable Hyatt group, featured in our cover shot, and as seen from the ground floor shops) is chockful of surprises: from a youthful staff dressed in In Good Company (a painfully chic Singaporean brand), which they pick out themselves from a well-edited list of choices from the store (how’s that for personalizing it, eh?), to unconventional check in counters that keep the experience as casual as possible, to the best rooms with thoughtful touches of the surrounding small shops echoed in the design from the mailbox framing the room numbers and the shopkeeper’s slatted wooden doorways for the bathroom entry, to an amazing rooftop bar and their tepees, perfect for creating personal space even in a crowd.
I nursed their signature drink on my last night of the #PassionMadePossible experience, The Rhubarb: rhubarb puree, strawberry and lemon juice topped with sparkling wine and a shot of vodka!