Song of the angels 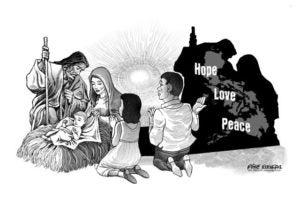 Tonight, and all the way to the 13th of January, we stop.

It is the holy night, when the Christ child was born of the Virgin Mary.

Christians everywhere once again listen intently to the song of the angels: Glory to God in the highest, and on Earth peace to people of good will.

These lyrics bear repeating in a world that often tends to go awry.

The Gloria reminds us that there are things more important than the mundane after which many hanker.

There are humility and detachment, epitomized by the incarnation of the Son of God, stripped of divine splendor, in a cave.

There are love and responsibility, shown by the Virgin in accepting the call to mother no less than the Savior of the world himself.

There are justice and sacrifice, exemplified by Joseph in his custody and protection of the Virgin and her Son, whom he as foster father gladly served.

There are simplicity and wonder, those powerful antidotes to cynicism that sped the steps of the shepherds to the site of Jesus’ birth.

There are wisdom and courage that bid the wise men to leave the comforts of study and cares of astrology and embark on a quest, guided by a star, to find the One who moves the sun and stars.

The Gloria reminds us that there are things humans must be content with, chief of them peace, and peace does not come when we seek other things like riches and honor, power and pleasure for ourselves.

Those things rightly belong, like gold, frankincense, myrrh, and adoration at the feet of the child who is king.

Let us go back to the manger tonight, and in search of Christ our peace lay at his feet, as free gifts, his own blessings that were given over to our stewardship.

To one and all, a very merry, long Christmas.