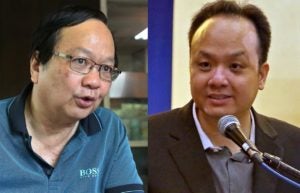 The year 2018 has brought a lot of “economic shocks” not just for the local business community in Cebu but for the entire country.

Right at the start of the year, a new law which drastically altered the country’s tax collection was implemented. The Tax Reform for Acceleration and Inclusion (Train) law exempts workers with an annual income of P250,000 below from paying income tax.

But to compensate for this loss in tax revenues, the law also increased excise taxes on various products like fuel, sugar, coal and automobiles, among others.

Throughout the year, the entire country experienced record-high soaring of the prices of basic commodities while world market prices of fuel also experienced several weeks of increases.

Business leaders in Cebu saw these series of events as a challenge for businesses to cope and make sure to increase their productivity amid these concerns.

For Mandaue Chamber of Commerce and Industry (MCCI) President Stanley Go, these events made it seem like the past year passed by so quickly.

“On the business standpoint, I think time moved so fast. A lot has happened in 2018 and it really felt like it was so short because of so much changes in the business landscape,” he said.

“There were a lot of fears midway because of the inflation brought about by the policies imposed, and outside factors like oil prices, exchange rates. It happened so fast for us, specially the food sector. There was also the prices of rice that went so high and the prices of fish which increased so much,” he added. 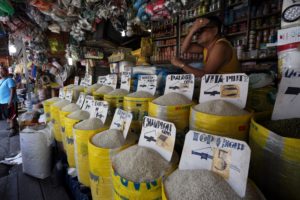 The rising prices of rice is one of the factors that have affected the increasing inflation in 2018.
CDN FILE PHOTO

Inflation rates in 2018 went way beyond the government’s target of between 2 to 4 percent.

It peaked during the latter half of the year starting July at 5.7 percent, August at 6.4 percent, and September and October which reached 6.7 percent – the highest in over nine years. It started easing in November at 6 percent.

Cebu Chamber of Commerce and Industry (CCCI) President Antonio Chiu agreed on the “major impact” brought by the Train law and inflation to the business community.

Despite this, Chiu sees a silver lining with the downward trend of the prices of basic commodities as the government moves to address the concerns which led to high inflation this year.

He, however, also cited the need for the government to properly manage the rice supply.

“The downward trend is forecast to continue for some more months. But not immediately. But government has every chance now to correct whatever error happened,” he said.

Based on their earlier meetings with the Cebu Provincial Price Coordinating Council, Chiu said they learned from representatives of the National Food Authority (NFA) that there are a lot of rice supply in the country but the problem is on how they should be able to distribute it as effectively as possible.

The country was also lucky, Chiu said, since November is the peak season for the harvest of rice, which helped lower down inflation.

During the high inflation months, it was found that rice was the biggest factor.

As for external factors like oil prices, he said the country was just lucky that the world market trends also showed decreases in prices of oil in the past few weeks after several continued increases in the previous months.

Efren Carreon, director of the National Economic and Development Authority in Central Visayas (NEDA-7), also acknowledged that the region’s economy faced some challenges with inflation and the Train law.

But he said the region was still “doing fine.”

“That was one of the biggest challenges in 2018. But despite that, we still see a resilient regional economy. Businesses are still brisk. If you go to the mall, you still see lots of people lining up, buying goods and commodities. People are still going to restaurants,” he noted.

For Central Visayas, Carreon said, the region is lucky to have varied and diverse sectors that contribute to economic activity.

He cited tourism, the IT (Information Technology) and BPM (Business Process Management) industry, real estate, and manufacturing as major contributors. While others may be experiencing slower growth, this is compensated by faster growth on other sectors.

The most active sector this year had been tourism.

The opening of the Terminal 2 of the Mactan Cebu International Airport (MCIA) last July has also opened more international direct flights to Cebu,

while the six-month closure of Boracay Island also diverted some domestic and international tourist to Cebu and the rest of the region.

Department of Tourism in Central Visayas (DOT-7) Director Shalimar Tamano said the Chinese tourist market had been propelling the statistics for tourist arrivals in the region.

“In the China market, we came late. I think we came in because of the new leadership. We opened up, there’s warmer diplomatic relations. They’re a sustainable market and I think there’s no going back,” he said.

According to Tamano, they expected the number of Chinese tourists who visited the region in 2018 to breach the 500,000 mark, and more so in the coming year.

China has been the fastest growing tourist market for the region in the past two years.

From only 244,925 in 2016, the number of Chinese tourists who visited Central Visayas in 2017 almost doubled to 429,306, making them the second biggest tourist market for the region, next to the Koreans. They have also overtaken Japan which is now at third place.

More flights from Cebu to different cities in mainland China have been opened this year. Another one is opening by January 2019.

Tamano said China Southern Airlines would have its inaugural Cebu-Guangzhou flight on January 22. They will be flying this route and back for three times a week.

Based on records from the MCIA, there has been a 22.76 percent increase in the number of foreign tourists arriving in Cebu from January to September this year, compared to the same period in 2017.

A total of 1.4 million foreign tourists landed in the MCIA in the first nine months of the year. In 2017, there were only 1.15 million.

IT-BPM at the backseat

As tourism experienced yet another banner year, its usual partner, the information technology (IT) and business process management (BPM) sector took a “wait and see” stance in 2018.

Cebu IT-BPM Organization (CIB.O) Managing Director Wilfredo Sa-a Jr. admitted that there were challenges for the industry in the past year including uncertainties with US President Donald Trump’s protectionist policies and that of the pending Tax Reform for Attracting Better and High-quality Opportunities (Trabaho) bill in Congress.

“There were some apprehensions also on the Train 2 (Trabaho bill), on how it will affect BPO locators. I must agree, it’s still a wait and see attitude for some existing and incoming investors,” he said.

The bill seeks to rationalize tax incentives which has cast a cloud of uncertainty on industries that have used these perks to invite companies to set up in the Philippines as a way to offset the otherwise high cost of doing business in the country, one of which is the IT-BPM sector.

At the same time, it seeks to gradually lower the corporate income tax (CIT) on local companies which is currently at 30 percent, one of the highest in Southeast Asia.

But for Sa-a, the past year had been a mix of good growth for some and flat growth for other players in the industry.

Some companies had reported even 100 percent growth and new players also came to Cebu including global giant Amazon, but more could have been expected.

“Overall, there were more growth than contraction of operations. I would still say 2018 was a good year for Cebu, even though it’s not as good as previous years,” he said, adding that the situation is much worse in Metro Manila which had suffered a decline.

Based on records from the CIB.O, there were around 150,000 workers in the IT-BPM industry as of December 2017.