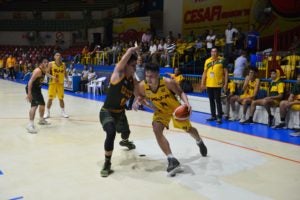 USJ-R’s RJ Dinolan tries to penetrate the USC defense in an elimination round game in the recent Cesafi season.  CDN File

Cebu City, Philippines – The Cebu City Sharks-Casino Ethyl Alcohol has retooled its roster as it gears up to vie for a spot in the playoffs in the Maharlika Pilipinas Basketball League Datu Cup.

The Sharks, which sits at 8-11 (win-loss) and tied for the eighth spot in the South division, have added former University of San Jose-Recoletos standout Ralph Jude Dinolan to its roster and let go of five players.

Dinolan said he was excited at the shot that is being given to him, which he hopes would bring him closer to his dream of making it to the big stage — the PBA.

“I think it’s every player’s dream to make it to the PBA. This opportunity brings me closer to that and I feel overwhelmed and blessed to be part of this team,” said Dinolan, a former member of the Cesafi Mythical Five.

Dinolan related that he only started practicing with the team in late December and he is still getting his feet wet at this level.

“This is a whole new level and I am still getting used to the plays and of course, my role on the team. We have a lot of veterans on this team and I am learning from them, and I will do whatever I can to help the team make the playoffs,” added Dinolan, who is now reunited with his former USJ-R teammates Jaybie Mantilla, Victor Nunez and Kevin Villafranca. /rcg