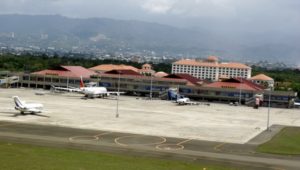 Cebu City, Philippines – In a year’s time, the Mactan Cebu International Airport (MCIA) will have a fully renovated Terminal 1, one that will have its own distinct design.

The renovation of the terminal has already started and will be done in two phases so that the domestic operations will remain at Terminal 1.

The first phase of Terminal 1’s renovation will be implemented from January to June 2019 while the 2nd phase will be done in the second half of the year.

While Terminal 1 would not replicate the design of Terminal 2, it will complement the international terminal, according to GMCAC president Louie Ferrer in a statement.

In fact, the Manila-based architectural firm Budji + Royal Architecture + Design will be tasked to come up with the look of the renovated Terminal 1, which will be based on a resort-type design, Ferrer said. The firm was also among those who were involved in the Terminal 2 design.

Terminal 1’s design will be different and will complement Terminal 2’s design to  strengthen the overall branding of MCIA as the world’s friendliest resort airport, Ferrer added.

In an earlier interview, Andrew Azquaah-Harrison, chief executive advisor of GMCAC, would not give any hint as to what the design would be.

But he disclosed that among the features of Terminal 1 is an “airport village,” an area where the arrival and departure area will merge. This will allow local and foreign passengers to mingle.

GMCAC also plans to expand the transportation hub so it could accommodate more taxi cabs, private vehicles and buses.

Once completed, Terminal 1 will increase its capacity up to 11 million passengers annually, said Ferrer.

About two years ago, GMCAC had started making improvements in Terminal 1.

This system will enhance the processing speed of passengers while helping airlines reduce the flight delays.

An AODB is the central database or repository for all operative systems and provides all flight-related data accurately and efficiently in a real-time environment to approved users.

On the other hand, an electronic baggage reconciliation system is a method of baggage management that creates a bag tag and tracks the baggage throughout the sorting process until it is delivered to the aircraft.

Another improvement will be the installation of level 3 in-line screening for checked-in baggage.

This will involve the replacement of conveyor lines to match the new system. The equipment for level 3 in-line screening will cost $1.5 million.

GMCAC also has other plans that include the expansion of the airport, the building of a third terminal and the construction of a hotel beside Terminal 2.

It has been awarded as an original proponent for the proposed expansion of the airport. /bjo

Read Next
Politicians told: Don’t use Sinulog to campaign