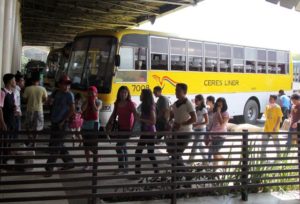 Passengers heading south line up outside the Cebu South Bus Terminal in this file photo.

Cebu City, Philippines – Due to several road closures in Cebu City for the 2019 Sinulog Festival, the Cebu South Bus Terminal (CSBT) will open a temporary terminal in the South Road Properties (SRP) on January 20.

In an advisory posted by the official Facebook page of the Cebu Provincial Government on Thursday, January 10, the CSBT, located in N. Bacalso Ave., will be temporarily closed starting midnight of January 19, which is a Saturday.

“The temporary bus terminal will be at the El Pardo St., South Road Properties (in front of IL Corso Cebu). CSBT will be opened again on Sunday evening as soon as Cebu City Government opens N. Bacalso Avenue to the riding public,” the advisory stated.

“Some jeepneys will be granted special permits by the LTFRB to ferry passengers from the temporary terminal to the Mambaling flyover and Basilica Minore del Sto. Niño,” it added.

The opening of a temporary south bus terminal is being done every Sinulog for the convenience of the riding public. /bjo

Read Next
Devotees show love for the Holy Child