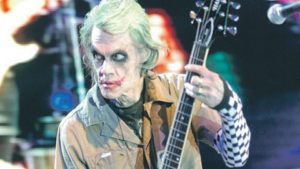 Cebu City, Philippines – “He was an original.”

This was the reaction of Lorenzo “Insoy” Niñal, the vocalist and guitarist of Cebuano rock band Missing Filemon after the passing of Filipino rock icon Joey “Pepe” Smith on Monday, January 28, 2019.

Niñal, in a Facebook message sent to Cebu Daily News Digital, said that the country lost its only genuine rockstar.

“Being a rockstar is a lifestyle and only Pepe lived that kind of life. He was a pioneer,” he said.

In a report from Inquirer.net, Smith reportedly suffered a stroke a few years ago. He was 71 years old when he died of cardiac arrest.

Smith was a member of Juan dela Cruz, a popular rock band in the 1960s along with Mike Hanapol and Wally Gonzales.

Juan dela Cruz is known for its songs like “Himig Natin”, “Beep Beep”, “Balong Malalim”, “No Touch”, and ”Pinoy Blues.”

“He influenced me and my band to do the same in Cebu – to try something new and different when we started. Long live Pepe Smith!” Niñal said.

Niñal is the vocalist and a guitarist of Missing Filemon. Other members in the Cebuano rock band are Eimmer Tabasa (drummer), Gumer Entero Jr. (guitarist), and Ronald Capio (bassist).

According to its official Facebook page, Missing Filemon was founded in 2002. Its debut album was in 2003 titled, “Suroy-Suroy.”

The Cebuano rock band popularized songs like “Sine-Sine”, “Prinsipal”, “Englisera”, “Kawanangan”, and “This is the Song.” /bjo