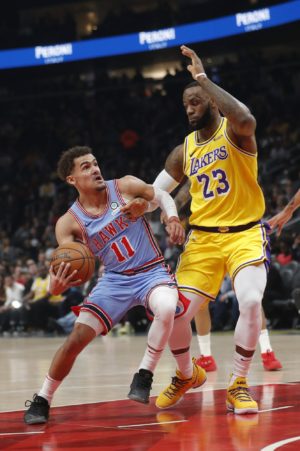 The Hawks snapped a three-game losing streak despite a triple-double from James, who had 28 points, 16 assists and 11 rebounds.

Both teams struggled mightily in the final quarter after an up-and-down track meet over the first three periods.

The Hawks scored just seven points in the final 6:33 but managed to hold on. Taurean Prince delivered a key 3-pointer with 1:48 remaining, and Young darted past James for a lay-in and a foul that thwarted any hope of a Lakers comeback.

Atlanta tied a franchise record for 3-pointers in a quarter, going 10 of 17 in the opening period for a 38-32 lead. The Lakers fought back to take a 69-65 edge at the half, but Atlanta pulled ahead for good to lead 100-95 going to the fourth.

Despite chants of “Kobe’s better” from the sellout crowd of 16,824, James was cheered loudly by a hefty contingent of Lakers fans. He turned in a dazzling effort, but it wasn’t enough to make up for the subpar group around him. Kyle Kuzma and Brandon Ingram scored 19 points apiece.

The Lakers had a chance after an Atlanta turnover led to a driving basket by James, cutting the home team’s lead to 116-113. But after desperately trying to come up with a steal, Los Angeles was forced to foul Kevin Huerter with 4.3 seconds left. He made the second of two free throws to seal the victory.