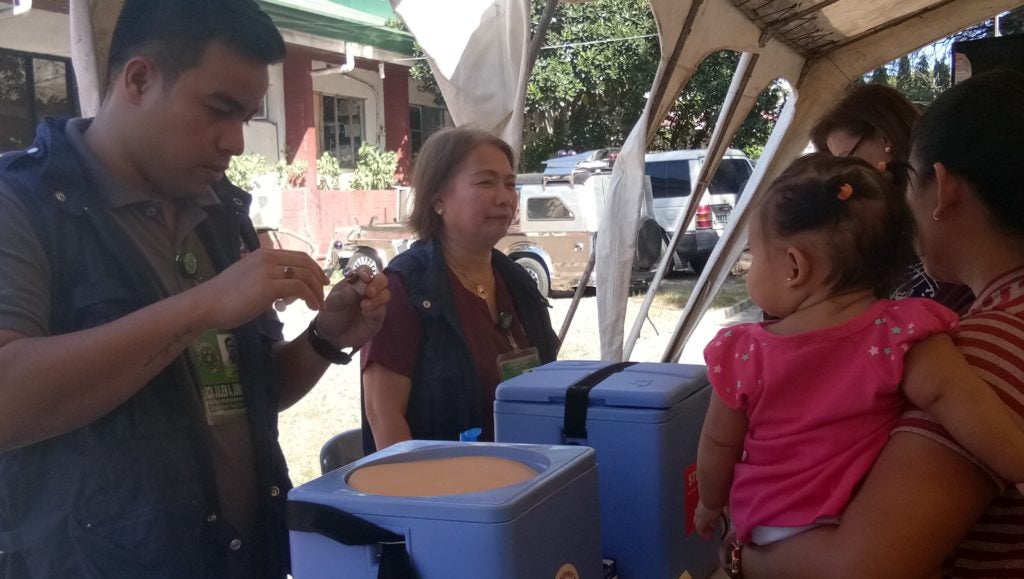 CEBU CITY, Philippines — Parents are encouraged to bring their children to their nearest health centers so that their children can be vaccinated and be protected from measles.

Dr. Jaime Bernadas, Department of Health in Central Visayas (DOH-7) director, made this appeal to parents during the Regional Information Campaign on Vaccination and Immunization for Central Visayas at the Duljo-Fatima Barangay Hall in Cebu City on Monday, February 18.

Bernadas said this campaign was in response to Health Secretary Franciso Duque’s declaration of a nationwide measles outbreak.

He reiterated his appeal to parents to have their children vaccinated and be protected against measles especially six-month-old to 59-month-old children.

Read more:VSMMC puts up fast lane for patients with measles

Earlier, President Rodrigo Duterte appeared in People’s Television Network (PTV) in order to encourage parents to visit their rural health units in order to prevent the further spread of the virus through immunization of their children.

Bernadas assured local government units (LGUs) that they would assist them, together with all health workers, in educating the public about the safety and effectiveness of the vaccine.

The event was also attended by Secretary Michael Dino, Presidential Assistant for the Visayas; and representatives of the Department of Education and Department of Interior and Local Government; Department of National Defense; and Duljo-Fatima barangay officials.

To recall, nine regions in the Philippines were put under measles outbreak including Central Visayas by Duque.

Dino, for his part, said that the situation was already alarming, especially that this could have been avoided, only if all the children were immunized against the deadly disease.

Read more: Measles claims life of a two-year-old girl from a Cebu town, the 3rd in the province this year

Based on the monitoring of the Regional Epidemiology and Surveillance Unit (RESU)-7, from January 1 to February 17, 2019, Central Visayas has already recorded 284 cases of measles with three cases of deaths.

Dino also encouraged other barangays to do the same campaign by coordinating with the DOH-7 and other agencies concerned.

Since the agency has intensified its immunization campaign this month, the agency has already vaccinated around 2,087 children ages 6-59 months and 1,294 individuals ages 5-years old and above.