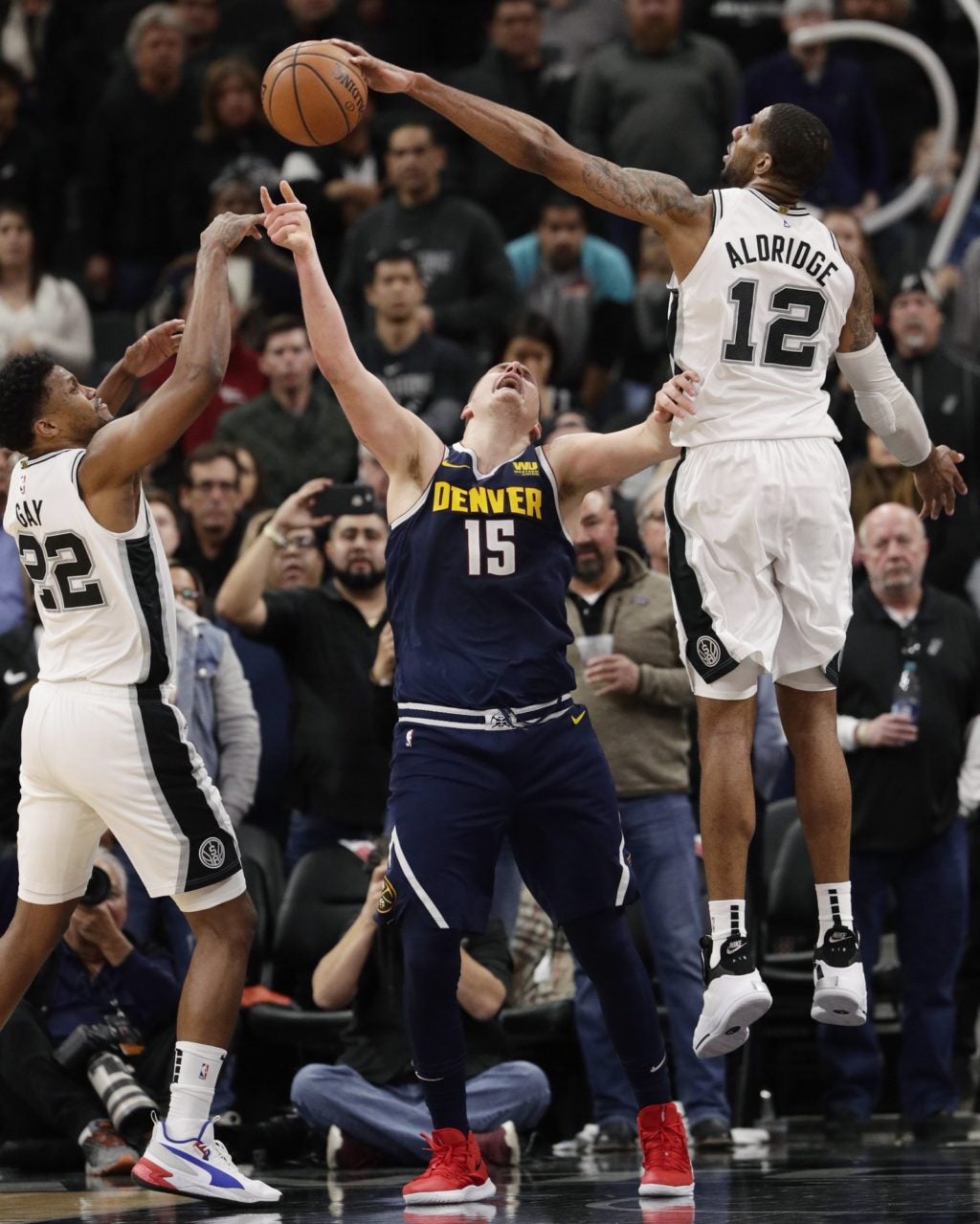 SAN ANTONIO — After struggling on a recent road trip, the San Antonio Spurs’ improved defensive effort has helped them get some wins.

DeMar DeRozan had 24 points and LaMarcus Aldridge added 22 as the Spurs withstood Denver’s closing rally to hold on for a 104-103 victory over the Nuggets on Monday night.

San Antonio won its third straight, limiting the opposition to 99 points in those games after losing seven of eight on their annual Rodeo Road Trip.

“It almost seems like we’ve just been able to flip a switch, which isn’t the easiest thing to do,” Spurs guard Patty Mills said, “but we have in the last three games. It’s been our defense that has won it for us.”

Denver rallied from 21 points down and held San Antonio scoreless over the final 2 1/2 minutes, getting the final nine points to pull within one, but missed three shots and had a turnover in the final 16.2 seconds.

“We hit back, but it was a little too much to overcome,” Nuggets guard Jamal Murray said.

Murray missed a 3-pointer with 16.2 seconds and a runner 5 seconds later but the Nuggets maintained possession as Spurs forward Rudy Gay tipped the ball out of bounds both times. Aldridge then slapped Nikola Jokic’s pass down and Gay was fouled after capturing the loose ball.

Gay missed the ensuing free throws with 4 seconds remaining. After San Antonio committed a foul on the initial inbounds, Denver guard Gary Harris missed a turnaround 3-pointer over Patty Mills from the left corner off a broken play as time expired.

The Nuggets suffered their 13th straight loss in San Antonio.

Murray finished with 25 points and Jokic had with 22 points and 10 rebounds for Denver in its third straight loss. Harris had eight points on 3-for-9 shooting.

Denver fell two games behind Golden State for the best record in the Western Conference.

San Antonio began the night in eighth place in the West — one-half game behind the Los Angeles Clippers, who were playing the Lakers.

Coming off a win over Oklahoma City on Saturday, the Spurs have beaten two of the top three teams in the West in consecutive games.

This matchup was a possible playoff preview, but San Antonio is still fighting to make the postseason.

“We’ve got to have it to get to the playoffs,” said Spurs point guard Derrick White, who had 11 points and a career-high nine assists. “That was more important than future matchups.”

Denver trailed by double digits throughout the second quarter but cut the advantage to three points midway through the third. The Nuggets limited the Spurs to 4-for-10 shooting in the opening 6 minutes of the second half to start rallying.

The built a 36-17 lead to match their largest advantage after the opening quarter.

“We lost the game in that quarter in my opinion,” Malone said.

Harris played in his sixth game and made just his second start since missing four games with a groin injury.

He finished 3 for 9 from the field while scoring eight points in 27 minutes.

Denver is hoping Harris can regain the consistency that helped him score 13.9 points per game prior to the injury.

“I think for me, I have to constantly remind myself that Gary Harris is still trying to find a rhythm in that starting lineup and a rhythm overall,” Malone said. “We’ve got to find ways to help him get going.” /bmjo