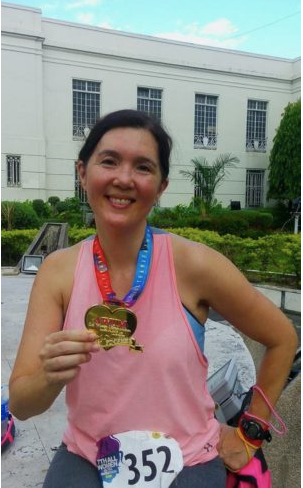 Pia Cayetano, who finished last year’s All Women’s Ultramarathon, is joining again this year’s edition of the running event. |

CEBU CITY, Philippines —  Senator Pia Cayetano will be competing for the third straight year in the 8th All-Women Ultra Marathon (Awum), which will be held Saturday night, March 9, 2019.

The 50-kilometre race starts at 10 p.m. from The Terraces of the Ayala Center Cebu.

Cayetano will be among the 350 women competing in this year’s Awum. She started joining for the third time. The first time was in 2016.

Before the start of the 50-kilometer distance run, a Mass will be held at the starting area at 8 p.m.

For its 8th edition will be using the same route that it used last year.

Runners will pass by major roads of Cebu City, onwards to Mandaue City, portions of Lapu-Lapu City and back to the finish line situated along Biliran Road within the ACC area.

According to Joel Baring, who is one of the helping hands of race director Dr. Willie Estepa, the race will have the women runners crossing three bridges, the Cansaga Bay Bridge in Mandaue, the Marcelo Fernan Bridge and the old Mactan-Mandaue Bridge. The last two bridges connect mainland Cebu to Mactan Island.

Baring added that all aid stations which will be spread along the race route are handled by different running clubs.

Organizers are expecting the first finishers to cross the finish line about 2 a.m. of March 10, Sunday. |bmjo