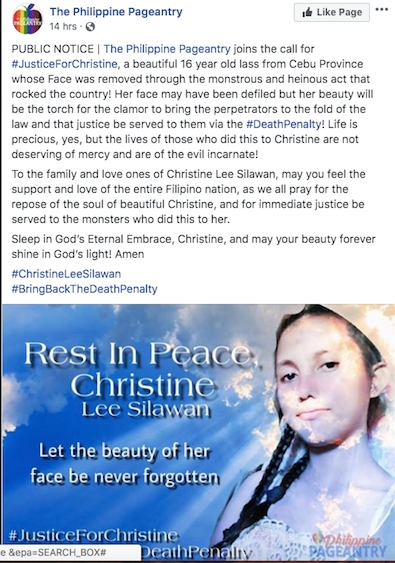 CEBU CITY, Philippines – Several individuals have joined the call for justice for the death of Christine Lee Silawan, the 16-year-old girl whose half-naked body was found in a vacant lot in Barangay Bankal, Lapu-Lapu City early on Monday.

“#JusticeForChristine,” was the call which the Philippine Pageantry posted on its Facebook page on earlier today, March 12.

“The Philippine Pageantry joins the call for #JusticeForChristine, a beautiful 16 year old lass from Cebu Province whose Face was removed through the monstrous and heinous act that rocked the country! Her face may have been defiled but her beauty will be the torch for the clamor to bring the perpetrators to the fold of the law and that justice be served to them via the #DeathPenalty! Life is precious, yes, but the lives of those who did this to Christine are not deserving of mercy and are of the evil incarnate! To the family and love ones of Christine Lee Silawan, may you feel the support and love of the entire Filipino nation, as we all pray for the repose of the soul of beautiful Christine, and for immediate justice be served to the monsters who did this to her.” the group said on FB.

In a private message to Cebu Daily News Digital, the page’s administrator said they were saddened by heinous crime that killed Christine.

“This is beyond beauty pageants. Hence, we are obligated to make a stand and make her face the symbol for the clamor for justice for her and not the crime scene photos,” said the FB page’s administrator.

“The monsters removed her face, we hope to make her face so famous that it will be the only memory for her and not her skinless skull”.

Several others posted comments on Christine’s FB timeline to either call for justice for her death or to express their condolences to her family since report on her brutal death became public early on Monday morning.  As of 6 p.m. today, at least 10, 000 individuals have commented on her timeline.

“Posting the picture of the alleged rape victim in social media is deplorable. It is adding insult to injury. To exagerate – it is “double rape” or “double dead case.”

Bañacia is asking Cebuanos to show respect for Christine and her family by deleting the pictures which they earlier posted on social media.

“We can share the info., or show your indigation of the incident by Not posting the vivid photos of the victim in social media. Kalooy gyud… Gi raped na, gi panitan na, gi pistahan pa sa social media. Please delete your posts. It will hurt the family, relatives and friends more.”