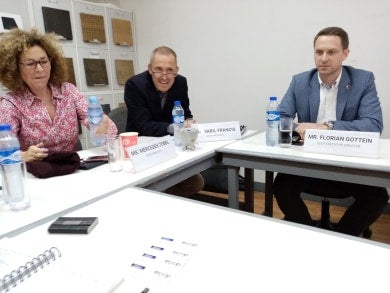 ECCP president Nabil Francis noted that the Philippines’ gross domestic registered growth for several years. The country’s GDP is projected to grow between seven to eight percent this year.

However, Francis cited the need for the Philippines to consistently implement its policies and incentives. Despite the country’s good economic performance, Francis said the Philippines has not attracted as much FDIs as its neighbors like Vietnam.

ECCP executive director Florian Gottein cited as an example the provision of the Trabaho bill, which seeks changes in the implementation of incentives for companies.

These incentives include a 3-year income tax holiday and up to five years allowable deductions for expenditure on labor, training, infrastructure building, and research and development.

Gottein said the proposal should only cover the new investments. He explained that the incentives offered by the Philippines to investors are among the factors considered by companies when they decided to come to the country.

Meanwhile, Francis said they welcomed the approval of the Ease of Doing Business Act although the implementing rules and regulations (IRR) has yet to come out. This would help bring in more foreign direct investments in the country, he said.

Francis also noted that some European Union countries would like participate in the government’s build, build, build projects.

The Philippines exports to EU in 2017 reached 2 billion euros.

EU is also the country’s the 5th largest source of tourists in 2017 at more than half a million./dcb