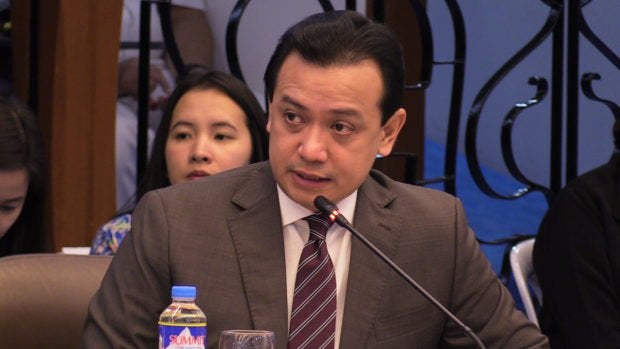 MANILA, Philippines–The Court of Appeals (CA) has denied the plea of Senator Antonio Trillanes IV to temporarily stop the trial of the reopened rebellion case against him before the Makati City Regional Trial Court Branch 150.

“We may not temporarily restrain or preliminarily enjoin the prosecution of the criminal action for rebellion at this stage because to do so would be to grant the principal prayer for certiorari, prohibition and/or injunction without the benefit of a hearing,” the Court’s 9th division said in a three-page resolution.

Trillanes went to the CA after Makati Court Branch 150 Judge Elmo Alameda set the resumption of trial today, March 20 with the prosecution presenting its evidence.

The rebellion case has been dismissed by the Makati Court on Sept. 7, 2011, after then President Benigno Aquino III granted Trillanes amnesty.

However, the amnesty was revoked by President Rodrigo Duterte’s Proclamation 572 stating that Trillanes failed to comply with the requirements to enjoy the benefits of an amnesty–filing an application form and admitting his guilt.

On Sept. 25, 2018, the Makati court granted the Department of Justice’s (DOJ) plea to reopen the rebellion case and order his rearrest.

Trillanes filed an appeal but Alameda denied it and set the resumption of trial with the prosecution’s turn to present evidence on March 20.

The senator then went to the CA saying Alameda’s decision is a “whimsical and arbitrary act of ignoring established jurisprudence.”

In the CA’s recent order, it gave the DOJ 10 days to comment on Trillanes’ petition.

The Makati Court meanwhile rescheduled the resumption of trial to May 27.