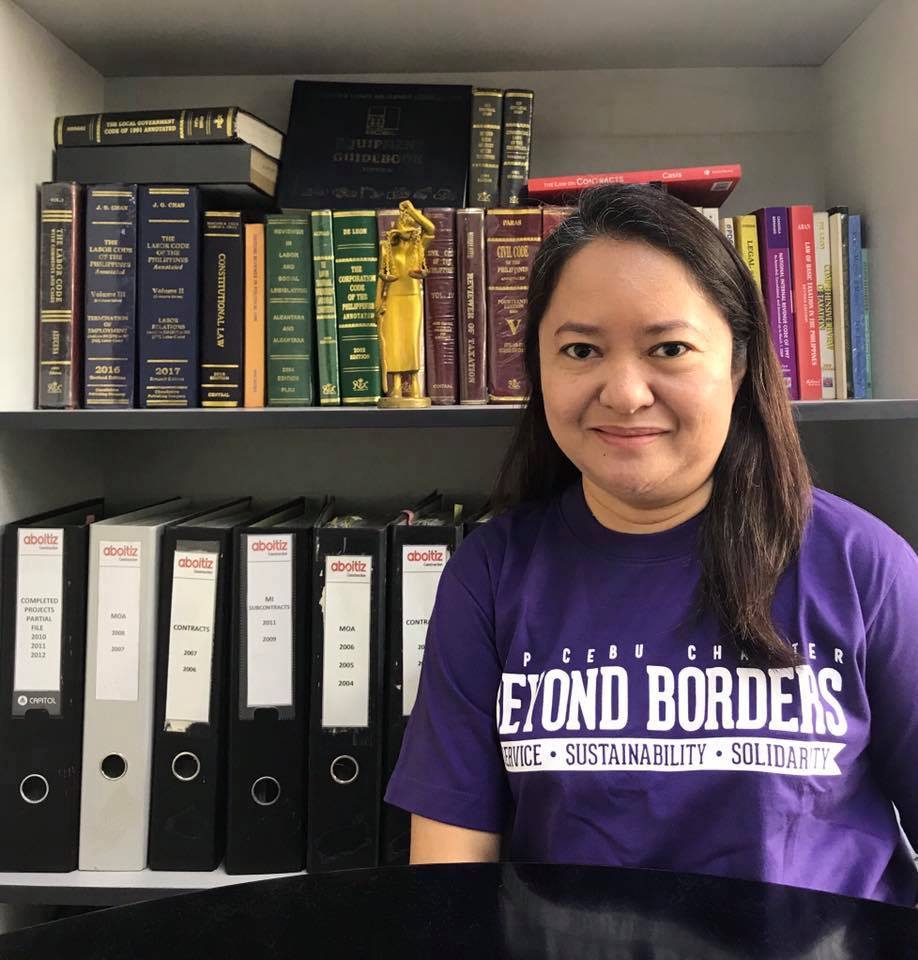 Elected last February 21 as the second female president of the Integrated Bar of the Philippines Cebu Province Chapter (IBP Cebu), Espina shared that her plans for the IBP for her two-year presidency is based on these three tenets.

“When you talk about service, we will further enhance the services that we are giving to our members,” said Espina in an interview with CDN Digital at the sidelines of the Benedicto College-leg of the IBP Cebu’s anti-bullying lecture series, an advocacy that Espina shared with IBP Cebu’s first female president, Lawyer Mundlyn Misal Martin.

During Martin’s term, Espina served as her vice president.

Espina said that she found out through an ongoing survey among the members for a need to have a cooperative that could help address the financial requirements of fledgling lawyers.

She, however, said that they also had established lawyers, who could also help these fledgling lawyers.

Espina’s plans also extend to the public or the community.

“Not just to our members, but also, services to society as a whole because that’s what we believe in. That’s also part of our obligation on not just to our fellow lawyers, but also to the courts, and to the public,” she said.

She cited their legal aid program and their lecture series as among the services that they were offering to society.

In their legal aid program, she said that just recently, new lawyers under the IBP would be required to render 120 hours of mandatory legal aid and for their lecture series, they had just conducted anti-bullying seminars at different local schools in the city, even going as far as Minglanilla, Consolacion, Toledo, and Mandaue.

On sustainability, she said she planned to have more sustainable environmental initiatives together with their partner, Oceana.

On solidarity, she said IBP Cebu was also partnering with various law organizations, and expanding their linkages and collaborations with different alumni associations of law schools in Cebu.

Espina is also proud of her involvement in the IBP Cebu’s Trial Academy, which is the first of its kind in the country.

The Trial Academy, which was established in 2017 when she was the chapter vice president, is an “institution that will teach young lawyers how to dress up in court, how to write a pleading, how to set up a law firm, how to do direct examination, how to draw up judicial affidavits, and so on.”

Every Saturday for three months, fledgling lawyers who are IBP members can attend classes for free, and learn the ropes of being in court. “The purpose of the academy is to be able to produce not just valued lawyers in society, but also lawyers with values,” she said.

Read more: Blazing trails in the practice of law

A scholar, among other things

As a child, Espina said she had always wanted to be a lawyer.

She took it up quite late in her career, when the University of Cebu established its School of Law right near her workplace.

A scholar since high school and an awardee of the Ten Most Outstanding High School Students of Cebu, Espina has taught accountancy subjects at the University of San Carlos and is an incumbent professor at the University of Cebu School of Law, where she earned her law degree.

Aside from being the IBP Cebu Chapter president, a professor, an alumni association president, and also a board member, Espina is also working as an assistant vice president (AVP) at Aboitiz Construction, Inc. where she heads the Legal and Contract Services Team.

How this CPA-Lawyer manages her time despite having many affiliations can be mind-boggling. Her secret?

“I guess when you love what you’re doing, then you’ll always find time to manage it,” she said, smiling.