Danao off to sizzling start in Red Durano Cup hoops 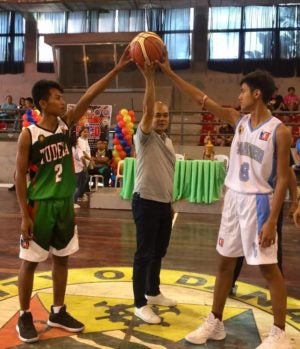 Congressman Red Durano tosses the ball for the ceremonial jumpball during the opening of the 9th Red Durano Cup. | contributed phohto

Cebu City, Philippines — The defending champions Danao did not waste any time racking up two wins in a row in what was a fruitful opening weekend in the 9th Congressman Red Durano Cup Basketball Tournament.

They then went 2-0 with an equally easy 88-83 win over Sogod the next day in the games that were held in Catmon.

Officials from the municipalities and one city that make up the 5th District of Cebu also came to show support for their athletes.

Compostela, Carmen, San Francisco and Borbon all sport similar 1-0 records after winning their games over the weekend.

Teams will be playing a single round-robin in the elimination round with the top four advancing to the semifinals. The top two finishers will enjoy a twice-to-beat advantage in this round.

The winners there will move on to compete for the title in a winner-take-all showdown.

Among those who have played in the Durano Cup include the likes of current Blackwater wingman Paul Desiderio, former Cebu Institute of Technology-University stars Allen Dimco and Kenny Rogers Rocacurva as well as Cesafi high school standouts Coco Tuadles of Ateneo de Cebu and Justin Mondares of the University of Cebu. /bmjo

Read Next
MSBC vs Dax in finals of Riders Basketball League