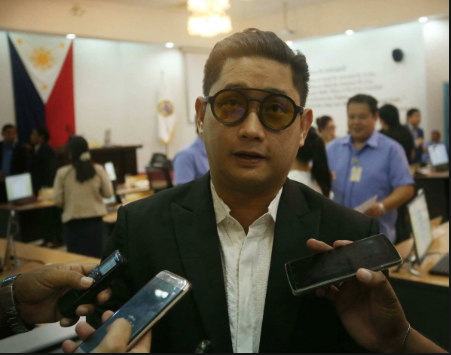 CEBU CITY, Philippines — Cebu Fourth District Board Member Sun Shimura will request the Commission on Election (Comelec) in Cebu province for security details for the duration of the campaign period after a still unidentified man reportedly threw a stone at his vehicle, leaving a hole in its rear window, while they were traversing the town’s Barangay Lanao last Saturday, March 30.

Shimura, who is now seeking election as mayor of Daanbantayan, 128 kilometers north of Cebu, said he believed the attack on his vehicle was “evidently premeditated” and might be politically motivated.

Before the incident, Shimura said he had received reports from his men that their tarpaulins and other campaign materials were taken down in some areas.

(We will be requesting the Comelec for a police escort, perhaps, during the campaign. It was really a clear attack on him because of the way it was done — a strong throw of the rock which went through the windshield. If it was just a prank or a ‘trip’ of person, then the impact of the rock as it was thrown would not have been that strong. Clearly, it was premeditated.)

Although nobody was harmed in the attack against his vehicle, Shimura said requesting for a security detail would be one of the precautionary measures that he would take especially that this was not the first time that there was an attack against his family prior to elections.

A day before May 14, 2018 barangay elections, the vehicle of Shimura’s stepfather, Daanbantayan Mayor Vicente Loot, Shimura’s mother and Mayor Loot’s wife, and Shimura’s children were strafed as they arrived at Maya Port after a trip in Malapascua.

The mayor’s two security personnel and the children’s nanny were wounded in the attack. Mayor Loot and the rest of the family escaped unharmed.

Shimura added that there are youth volunteers who committed to convoy his team throughout the campaign period to help in securing his campaign activities. However, he said that he would still prefer that a security detail would be given to him since only law enforcers are allowed to carry firearms due to the gun ban pursuant to the election period.

Provincial Election Supervisor Jerome Brillantes, in a separate interview, said they would review Shimura’s application once it would be submitted to them.

However, Brillantes said that only blue guards, who had been trained in securing VIPs, would most likely be given to Shimura.

He added that reports of violence in Daanbantayan might be a consideration for the possible upgrading of the town’s Election Watchlist Area (EWA) status during their Provincial Joint Security Control Center coordination meeting this Wednesday, April 3./dbs