VATICAN CITY – Pope Francis denounced the “cruel violence” of the Easter Sunday slaughter of Christians and foreigners in Sri Lanka as he celebrated the most joyful moment on the Christian liturgical calendar by lamenting the bloodshed and political violence afflicting many parts of the world.

Francis skipped his homily during Easter Mass but delivered his traditional “Urbi et Orbi” (To the city and the world) speech highlighting conflicts in the Mideast, Africa and the Americas and demanding that political leaders put aside their differences and work for peace. 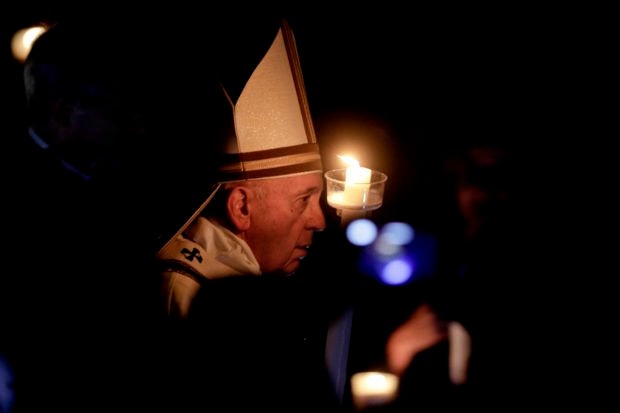 Pope Francis holds a candle as he presides over a solemn Easter vigil ceremony in St. Peter’s Basilica at the Vatican, Saturday, April 21, 2019. (AP Photo/Gregorio Borgia)

“May the one who gives us his peace end the roar of arms, both in areas of conflict and in our cities, and inspire the leaders of nations to work for an end to the arms race and the troubling spread of weaponry, especially in the economically more advanced countries,” Francis said from the loggia of St. Peter’s Basilica overlooking the flower-decked square below.

In a special appeal at the end, Francis lamented the “grave attacks” on Sri Lankan hotels and churches, which occurred just as the Christian faithful were celebrating Easter Mass that marks the resurrection of Christ following his crucifixion.

“I want to express my loving closeness to the Christian community, targeted while they were gathered in prayer, and all the victims of such cruel violence,” Francis told a crowd of around 70,000 people in St. Peter’s Square.

“I entrust to the Lord all those who were tragically killed and pray for the injured and all those who are suffering as a result of this dramatic event.”

In his Easter roundup of global conflicts, Francis warned that the world was increasingly becoming resigned to the ongoing battle in Syria.

He called for a “renewed commitment for a political solution” that would respond to Syrians’ need for freedom, peace and justice and allow for millions of refugees to return home.

He lamented how children in Yemen are “exhausted by hunger and war,” while in North Africa, Libyans are enduring a fresh round of fighting between rival forces battling for control of Tripoli, the capital

“I urge the parties involved to choose dialogue over force and to avoid reopening wounds left by a decade of conflicts and political instability,” he said of Libyan leaders.

Francis said he hoped the political and religious leaders of South Sudan would open a “new page in the history of the country” and work for reconciliation.

Francis hosted South Sudan’s president and opposition leader for a remarkable retreat at the Vatican earlier this month, during which the pope bowed down and kissed their feet, begging them to work for peace.

And history’s first Latin American pope also offered prayers for Venezuelans and Nicaraguans experiencing political and economic hardship and “all those who lack the minimal conditions for leading a dignified and secure life due to a crisis that endures and worsens.”

The Vatican said popes sometimes either deliver an off-the-cuff homily on Easter Sunday or skip it altogether, given the lengthy speech and blessing that follows.

Easter completed an exhausting schedule of Holy Week events for the 82-year-old Francis.

He went to a prison outside Rome to wash the feet of inmates on Holy Thursday, presided over the Way of the Cross procession at Rome’s Colosseum on Good Friday, and celebrated the Easter Vigil late Saturday night in St. Peter’s Basilica.

Read Next
She thought it was a scam: ‘Yolanda’ survivor wins P25M