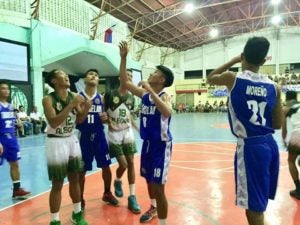 Alegria captured its first win of the quarterfinal round with a 111-99 thumping of Tabuelan. | contributed photo

Cebu City, Philippines—Defending champions Talisay City Aquastars gained a share of the lead in Bracket B after they blew away the Minglanilla Archangels, 91-78, in the quarterfinals of the 2019 Governor’s Cup basketball tournament on Monday, April 22, 2019, over at the Alegria Sports Complex.

Talisay City pounced on Minglanilla from the get-go and erected a 59-24 lead after the first two periods that set the tone for their dominant victory.

Cesafi Mythical Five forward Kendrick Abarquez led the way for the Aquastars with 15 points while Keaton Taburnal and John Villabrille each had 14 markers. Jay Deiparine rounded out the double-figure scorers for Talisay City as he added 12.

The win placed Talisay City into a tie for the lead in Bracket B with Tuburan with each team toting a 3-0 (win-loss) cards.

Minglanilla fell to an even 2-2.

In the other Bracket B game, the homecourt-toting Alegria dumped Tabuelan, 111-99, to notch their first victory of the quarterfinals.

Jamil Mahinay and Cris Ryan Garcia  put up 24 points each to lead the scoring parade for Alegria, which claimed their first win in three tries.

Tabuelan, on the other hand, dropped to 1-3 in this round.

Over in Bracket A, Danao City snapped its losing slump with a 96-70 thumping of Dumanjug at the Balamban Sports Complex.

The winning side improved to 1-2 while Dumanjug remained winless in there games.

Medellin also stayed in the hunt for a spot in the semifinals with a 94-84 win over Argao to boost their record to 3-1, a half game behind the idle and unbeaten Mandaue City Ballers, which totes a 3-0 record.