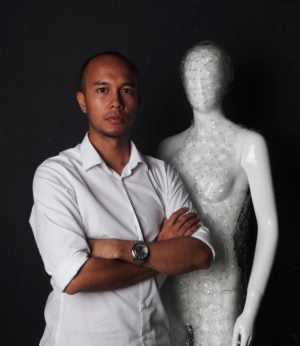 This as Sollano is set to leave for Cannes, France for the Cannes Edition of the Arabian Gala Nights slated May 18, 2019.

The 31-year-old Cebuano trashion artist confirmed to Cebu Daily News Digital during the CDN Freshtalk program that the event is part of the Cannes Film Festival, which will take place at the One World Villa, California Pezou, Cannes, France.

“They will make a fashion tribute experience about sustainable fashion. They will also make a tribute sad sa akoa being five years in the industry,” he said.

The Cannes Edition of the Arabian Gala Nights will be attended by heads of states, high-ranking government officials, royals and aristocrats, and personalities from the global business and entertainment industries.

The event is organized by Strategic Legacy Ventures, owner of Introducing Leaders and Arabian Nights – Davos and in collaboration with Elikia Hope Foundation and Biodry Energy (UK).

“A good friend of mine, he shared to the organizers nga there is this person (trashion artist) in the Philippines doing this and that you might be interested (to invite),” Sollano shared how he got into Cannes Edition of the Arabian Gala Nights.

Sollano is known for upcycling garbage into wearable art since 2014 as his way of showing his advocacy in protecting the environment.

For the upcoming international event, the Cebuano trashion artist will fuse recycled textiles and T’nalak fabric coming from the  T’Boli Tribe indigenous weavers of Lake Sebu in Southern Cotabato.

“I always have the heart for the indigenous communities. We have to protect our lumads,” his answer when asked why he chose to feature T’nalak fabric from the T’Boli Tribe.

He describes his creations as a hybrid of cultural integrations. The silhouettes will be traditional terno with butterfly sleeves made from the T’nalak fabrics.

By using such fabric, Sollano wants to raise awareness on the beauty of the textiles in Philippines and  to revisit the highly-sustainable way of living of the indigenous people.

This is not the first time he features  the T’nalak fabric in the international scene.

In 2017, he used it for the Neil Men’s wear, which was launched during the Sustainable Impact Development Summit in Cleveland, Ohio.

To show a variety of work, Sollano will showcase one wearable art during the Cannes Edition of the Arabian Gala Nights.

This is not the first time Sollano has been recognized in the international scene.

He was the only Filipino artist who was featured in World Economic Forum on ASEAN (WEF-Association of Southeast Asian Nations) last 2017 in Cambodia.

Sollano did exhibits in London, Paris, and New York.

He is also an awardee in the Cultural Leader of the World Economic Forum in 2016 in Davos, Switzerland along with international personalities like Bono of U2, Michelle Yeoh, and Kevin Spacey.

Read more: Get to know the Cebuano trashion artist behind  “Pagpupugay”

The Cebuano artist also designed the ““Pagpupugay” sculpture which honors the 44 members of Special Action Force (SAF) who lost their lives in Tukanilapao, Mamasapano, Maguindanao on January 25, 2015.