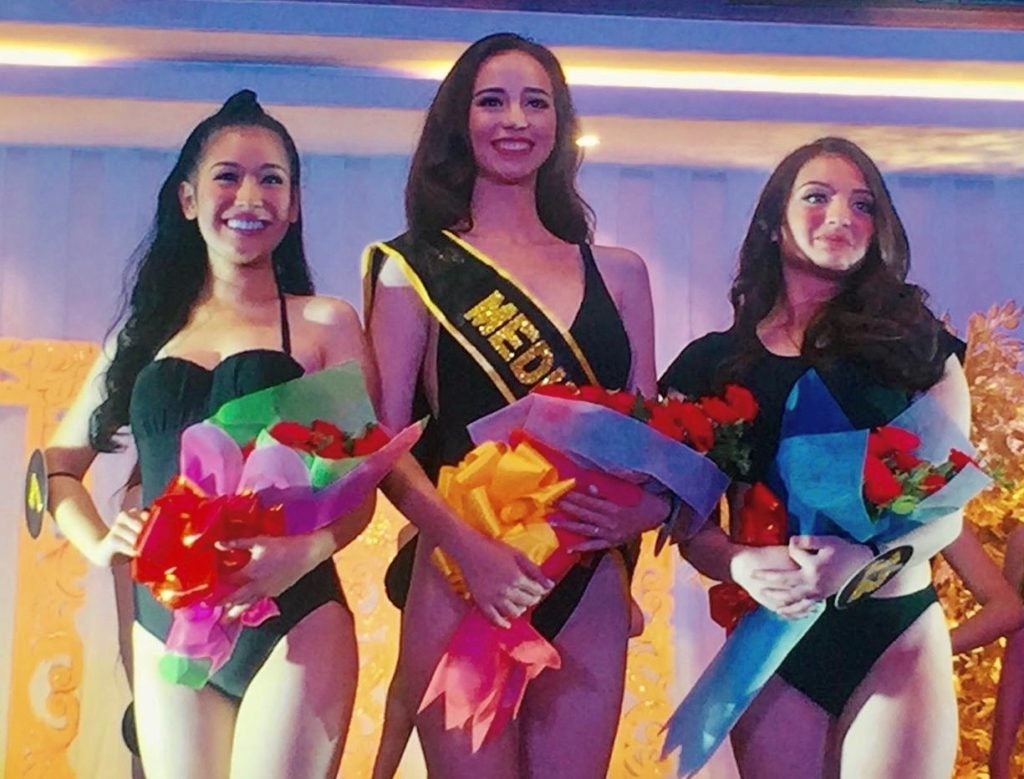 Mandaue City, Cebu—Miss Mandaue 2019 candidates proved that they weren’t just all about beauty as they showed off their wit in the Media’s Choice competition held at the Maayo Hotel on Wednesday, April 24, 2019.

Amanda Basnillo, 17, a senior high school student from the University of Southern Philippines Foundation (USPF), stood out among the 16 candidates in the competition.

Lorraine Mitzi Ambrad and Charlotte Stuck were first and second runners up.

“I am very honored. I am very grateful that the media has chosen me,” she told the reporters in an interview.

The Consolacion native revealed that she did a lot of reading, especially about current events, to prepare for the competition.

During the question and answer round, one of the questions was, “What bothers you most about what is happening in our country today?”

Basnillo replied that she is against the revival of the death penalty in the Philippines.

“Because most of the people I know [think] that the death penalty should be a thing here in the Philippines. I strongly disagree. As far as I know, the judicial capacity here is not strong enough,” she explained in an interview after the competition.

Titles under her belt are Miss Cesafi 2014 first runner-up for High School category and Miss USPF 2016.

Placing first runner up was Ambrad, a practicing journalist and a communications officer at the University of San Jose Recoletos (USJ-R).

“To be frank, nakulbaan ko kay this is my first major pageant,” she said.

(To be frank, I was nervous because this is my first major pageant.)

Ambrad, 22, believes that being a journalist is also an advantage to her in terms of being updated in current events.

But she was also pressured because she did not want people to think that she made it to the Top 3 of Media’s Choice because she is a practicing journalist.

“Media’s Choice showcases that ladies are not just pretty faces but [have] substances and depth,” she added.

She is also Utanon Festival Queen in 2012 in the town of Dalaguete, southern Cebu.

In 2017, Ambrad also made it to the list of Ten Outstanding Students of the Philippines (TOSP)-Central Visayas and the recipient of GMA Network Excellence Award.

Stuck, meanwhile, was emotional when her name was called during the awarding of winners.

“I cried because I did not really expect to win. I was not sure if I said the right words,” she said.

For her, winning second runner-up was a big thing since Miss Mandaue 2019 is her first pageant.

“It is really shocking,” she said.

Stuck, 18, has Filipino and French lineage. She was born in Indonesia but her family moved to Cebu City when she was five years old.

The Media’s Choice competition is one of the four pre-pageant activities for Miss Mandaue 2019 along with Swimsuit Competition, Fitness Competition, and Talents Night.

The candidates were ranked according to beauty and the question and answer round.

Other candidates in the competition

On the same day, the 16 candidates of Miss Mandaue 2019 also vied in the Swimsuit Competition.

Fifty percent of the scores during the Swimsuit Competition in the pre-pageant activity will be added for the final round of the Swimsuit competition during the coronation night slated on May 7, 2019 at the Mandaue Cultural and Sports Complex.

Clarence Sanchez, Miss Mandaue committee chairman, said they gave the candidates the freedom to choose the swimsuit design they’ll wear during the pre-pageant.

“There will be an official swimwear during the coronation night,” he said. /bmjo