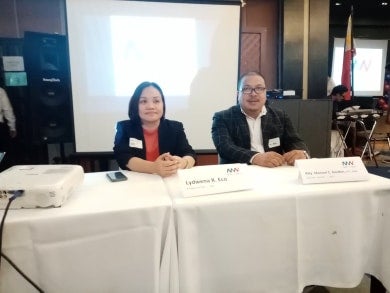 CEBU CITY, Philippines—Landowners can have their land developed without going into a joint venture with a major developer.

A newly-formed firm, Wan Pacific Empire Ventures+McGordon Consulting Groups (WPE+MCG), is offering an alternative to landowners who want to have their properties developed.

Lydwena Eco, WPE president and chief executive officer, says WPE-MCG merger offers “end-to-end real estate solutions to the market.” This meant that the company would handhold the landowner through the entire process of property development.

She explained that landowners have a vision of what they want to do with their property so the company would like to help them realize their dream.

According to Eco, real estate practitioners know that “now is the right time to unlock the value of land.”  “You see unprecedented real estate growth not only in Cebu but also in the entire Philippines,” she pointed out.

Eco noted that many landowners have the funds or funding source who would like to realize their envisioned development for their property.

“But landowners don’t necessarily have the right backbone, the right organization to actually do a real estate development,” she pointed out.

She added that WPE+MCG would like to address this gap by offering their services for a management fee.

According to Eco, their company offers full service to landowners including project conceptualization, planning, construction, sales and marketing, documentation and contract management and after sales and customer service.

The company will handhold their client through coming up with a viable concept, information on required investment for the project, including their management fee, and the return on investment.

When asked whether their business model is the first of its kind, Eco admits that as far as she knows, there is no company that has this concept.

“There are times when projects are delayed because of the regulatory requirements,” Gordon said.

By tapping WPE-MCG, landowners would no longer deal with the hassle of complying with government requirements, he said.

“They (landowners) can just sit back and relax, and get regular reports from our company on project updates. We will do everything for them,” Eco said.

She added that they would be open to work with those who own huge tracts of land as well as with small landowners with at least 1,000 square meters and up.

To demonstrate their capability of implementing a project, WPE-MCG will implement its first project, the mid-rise Niño Lapu-Lapu Residences. The project is a seven-storey condotel with 106 units that averages 24 sq.m. area. The construction will start on August 2019 and is scheduled to be completed by March 2020./dcb