Hanna Quiamco Diluvio wears a blue ball gown covered with feathers as she leads a contingent of Cebuanos dancing to the beat of the Sinulog during the 121st Philippine Independence Day parade in New York City on June 2.| Contributed photo: Yetbo Loverita FB page

CEBU CITY, Philippines — The Sinulog Festival is the pride of Cebuanos across the globe.

Their lead dancer Hanna Quiamco Diluvio shared that participating in the parade was such a joyful experience.

“We have a lot of Filipino devotees diri for Santo Niño and showcasing it sa parade made everyone very excited,” Diluvio told CDN Digital.

(It is such a joyful experience. We have a lot of Filipino devotees for Santo Niño and showcasing it during the parade made everyone very excited.)

During their dance presentation, Filipinos who were part of the crowd were screaming, “Pit Senyor!”

“It was a very proud moment. New York City had a memorable day experiencing Cebuano’s tradition and culture,” she said.

The choreography for the street dance competition was a collaboration of LaBarbera, Diluvio, and Shiran Ybanez.

Dancers’ blue and green costume were designed by LaBarbera, Ybanez, and Allan Fernandez.

Their main goal of showcasing the Sinulog Festival in New York is to make it big and popular in the United States of America (USA). 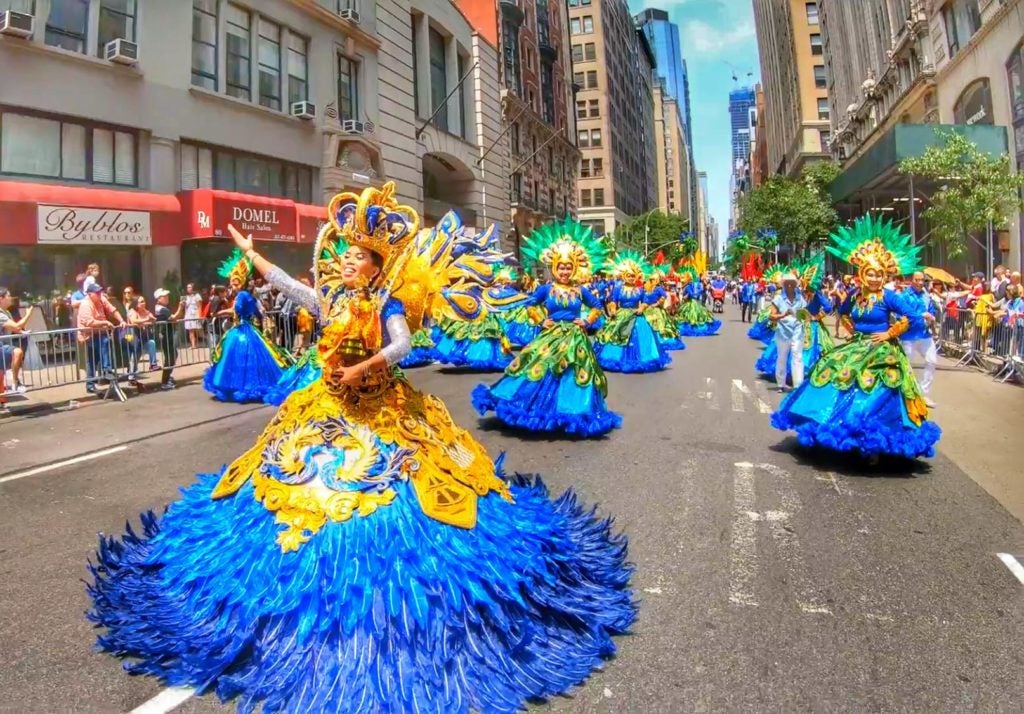 Diluvio is a former member of Cebu City’s Dancesport Team.

The 29-year-old Cebuana has been living in New York for six years. She works as a make-up artist and a dance teacher.

Blue feathers were used to cover her blue ball gown which weighs 10 kilograms.

“Orville is such a creative genius. I ask him to do a peacock inspired festival queen costume. After few days, he presented me the sketch and it was so beautiful,” Diluvio said.

The Cebuana dancer and make-up artist noticed that spectators including the Americans were amazed  by describing the costume as magical.

“His design is really made for the world to see. Mao proud jud ko in presenting it here in New York,” she said.

(His design is really made for the world to see. That is why I am proud to present it here in New York.) /dbs