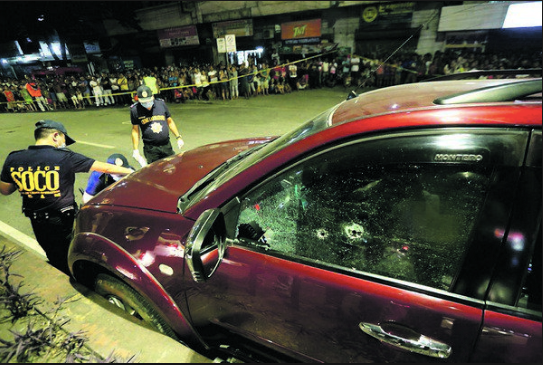 Police check the bullet-riddled Mitsubishi Montero that Junko Hamada was driving when she was killed by a motorcycle-riding gunman along Natalio Bacalso Ave in Cebu City on August 24, 2018. | CDN file photo

CEBU CITY, Philippines-The mastermind of the killing of Junko Hamada, the 71-year-old Japanese businesswoman who was ambushed last year in Cebu City, was arrested by authorities in Japan last week.

Police Lieutenant Colonel Frankie Lugo, Investigation and Detective Management Branch (IDMB) chief, said in a press briefing on Saturday, June 15, that Shinichi Hamada, 77, husband of the victim, was arrested in his house in Japan on June 13,  Thursday.

Lugo, however, said that they had no details yet of the arrest of Shinichi Hamada, and they were still coordinating with the Japan Embassy.

Shinichi Hamada was identified by JB Bertulfo as the brains behind the killing of the former’s wife, Junko Hamada.

Bertulfo and his cohort, Maryjane Aguilar, were arrested nearly more than a month after August 24, 2018 killing of Junko Hamada. 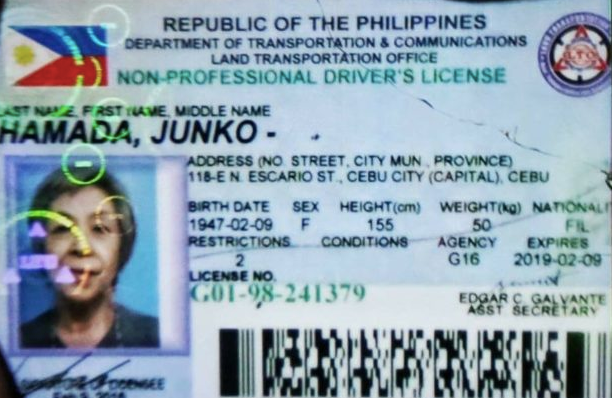 This is Junko Hamada’s driver’s license recovered from her bag inside her SUV. Junko Hamada was killed by motorcycle-riding assailants last August 24, 2018. | CDN file photo

Junko Hamada was then the president of Beams Corp., an export company in Talisay City, Cebu.

She was then heading home driving her SUV, a red Mitsubishi Montero, to Barangay Capitol Site in Cebu City when she was ambushed along Natalio Bacalso Avenue in Cebu City.

The police got their break when Aguilar, who was arrested in a buy-bust operation, confessed that she knew who shot dead the Japanese businesswoman.

Aguilar pointed to Bertulfo, who was believed to be her boyfriend, as the shooter.

He later admitted to police that he was only the shooter, but he claimed that Aguilar and Junko’s husband were allegedly the brains behind the crime./dbs