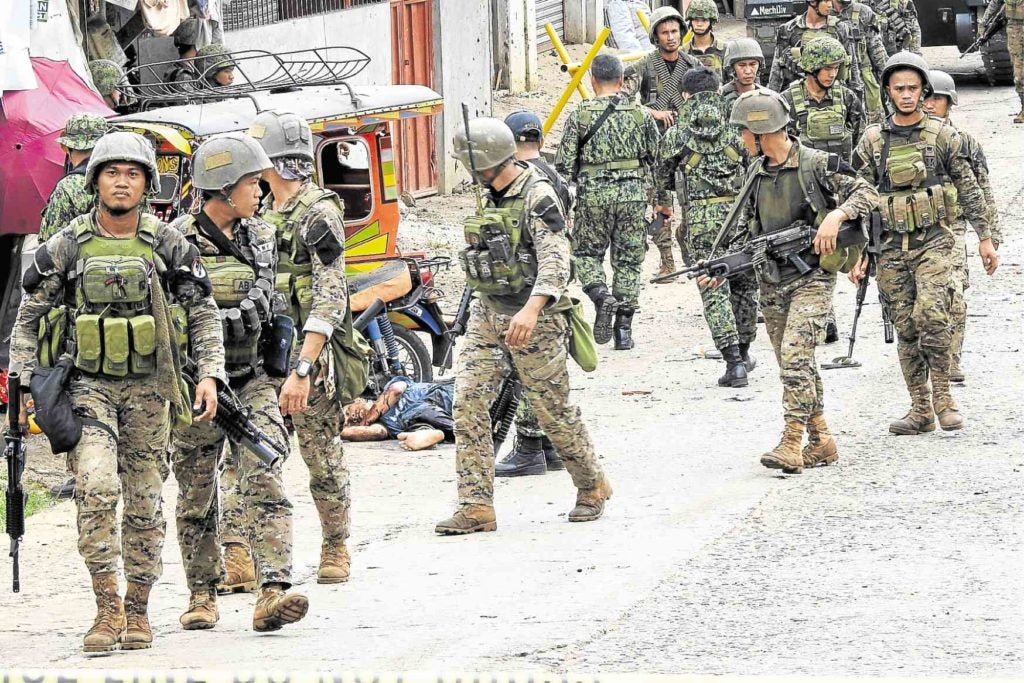 CASUALTY Soldiers walk past the body of a man slumped beside a tricycle following an attack in front of an Army headquarters in Barangay Kajatian, Indanan, in Sulu province on Friday. —AFP

The Islamic State (IS), to which some commanders of the Abu Sayyaf and militants who attacked Marawi City two years ago had pledged allegiance, has claimed responsibility for the suicide bombing at a military camp in Sulu province that killed eight people.

Officials said 12 other soldiers and 10 civilians were wounded in Friday’s noontime attack on the headquarters of the 1st Battalion Combat Team, which was set up only last month at Barangay Kajatian in Indanan town near Jolo, capital of Sulu province.

Malacañang on Saturday vowed to crush the people behind the bombing, which killed three soldiers, three civilians and the two suspected militants who carried the improvised explosive devices.

“The government will harness all its might to destroy the enemies of the state as well as their supporters to secure lasting peace in the region,” presidential spokesperson Salvador Panelo said in a statement.

“We will pursue them and all other terrorist groups that sow and instill fear among our people. We will run after them until they can run no more,” he said.

After IS issued the statement, “Filipino jihadists took to Facebook to discuss the attack, best areas to conduct operations and how to join the group,” SITE said.

IS’ Amaq news agency posted a photograph of two young men wearing vests designed to hold explosives next to a black flag.

Maj. Gen. Cirilito Sobejana, who was being installed as the new chief of the military’s Western Mindanao Command (Westmincom) when two blasts occurred, called the attack inhumane.

“We will intensify our offensives to crush terrorist groups that hamper the stability and development in Sulu,” Sobejana said in a statement.

The three civilians who were killed near the camp’s gate were identified as Basar M Abdul, 32, a “sari-sari” store owner, and two tricycle drivers—Dawili Julhumar Alamara, 29, and Mhudrigal A. Jamasali, 35.

Año said it remained unclear if the bombers, who were described as between 18 and 22 years old, were Filipinos or foreigners.

Sobejana said the gate guard, Macabadbad, had accosted a man who was acting suspiciously and discovered that he was carrying explosives.

Macabadbad radioed for help from an explosives and ordnance team. Inte and Alban responded but as they were about to inspect the man, the bomb exploded, killing the bomber and all three soldiers outright, Sobejana said.

“Another bomber ran inside, the troops shot him but when they were about to get near, the body exploded, same as the first one. Nearby structures fell, wounding our troops in position,” he said.

3rd attack in a year

He said the bombs could have also been remotely detonated.

Friday’s attack in Jolo took place while Sobejana was signing his appointment papers during ceremonies presided over by Armed Forces chief of staff Gen. Benjamin Madrigal at the Westmincom headquarters in Zamboanga City.

In a statement on Saturday, Madrigal said the three soldiers did not die in vain because they saved many more lives after detecting the bombs carried by the militants.

It was the third suicide attack in a year. The attacks included two blasts that ripped through the Jolo Catholic cathedral and its grounds in January, killing 23 people, and a van bomb at a military checkpoint in Basilan province that killed 11 in July last year. —With reports from Nikka G. Valenzuela and the wires