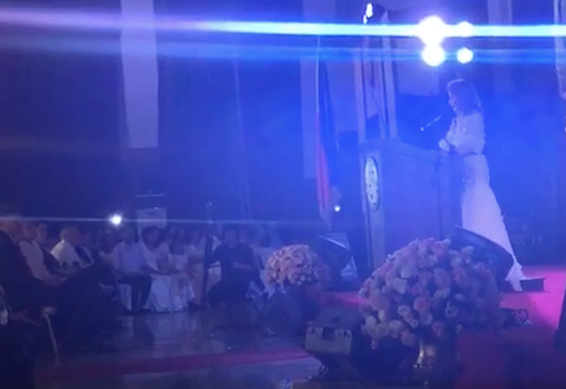 Cebu Governor Gwendolyn Garcia lays out her plans for the province in her term as she also recalled the lockdown incident in her previous term as governor of Cebu. | Rosalie O. Abatayo

CEBU CITY, Philippines — Today marks the start of a fresh term for elected officials in the government.

And for Cebu Capitol, an inaugural ceremony of Governor Gwendolyn Garcia attended by allies and non-allies kicked off their three-year term.

Garcia, speaking before an audience composed of fellow officials and business leaders, began her term by reminiscing the ups and downs of her previous three-term administration in the province.

She first referred to the 42-day lockdown at the Capitol when she was faced with a 6-month suspension order in December 2012, six months before she would step down from the governor’s seat in June 2013.

“I remember the long days and the restive nights while we were holed up here and under siege for all of 42 days,” she recalled.

Garcia also lashed out at the personalities who implemented what she believed was an illegal suspension order that was issued by the Malcañang.

She spoke of former Department of Interior and Local Government (DILG) Secretary Mar Roxas and former Police General Marcelo Garbo, who was police regional director at the time.

She also spoke of the person who was to “take her place” during the suspension, referring to former Vice Governor Agnes Magpale who was named Acting Governor during Garcia’s suspension.

“By some stroke of fate, we met in the political battlefield last May. The Cebuanos were thus given the choice, the chance to right the wrong that happened here in December 2012,” Garcia said.

“And the Cebuanos, with their innate sense of justice and fair play, handed down their verdict conclusively, unquestionably, overwhelmingly,” she added.

Garcia won by a margin of 288,000 votes against Magpale in the May 2019 gubernatorial race.

The new governor also lashed anew at the performance of the former provincial administration raising the point of the pending P1.3 billion loan before the Development Bank of the Philippines for the construction of the 20-story Capitol resource center.

Garcia has openly said the edifice was not part of her program of government and that she would not use the loan for the building when she would assume office.

“They ran on words: empty slogans in place of vision; false narratives of their purity in place of action; and character assassination in place of any kind of track record,” Garcia said commenting on the previous administration’s tagline, “Kalambuan sa matag Sugbuanon” (Progress for every Cebuano).

Garcia said her administration would have to retrace its step from where she left in 2013, “undo the damage that has been done and find our way again to number 1.”

An inter-LGU (local government unit) coordination to solve traffic woes, Metro Cebu-wide mass transport system, solving garbage management, bulk water production and distribution and the upgrade of medical facilities are among the challenges that Garcia said she would work on in her term./dbs