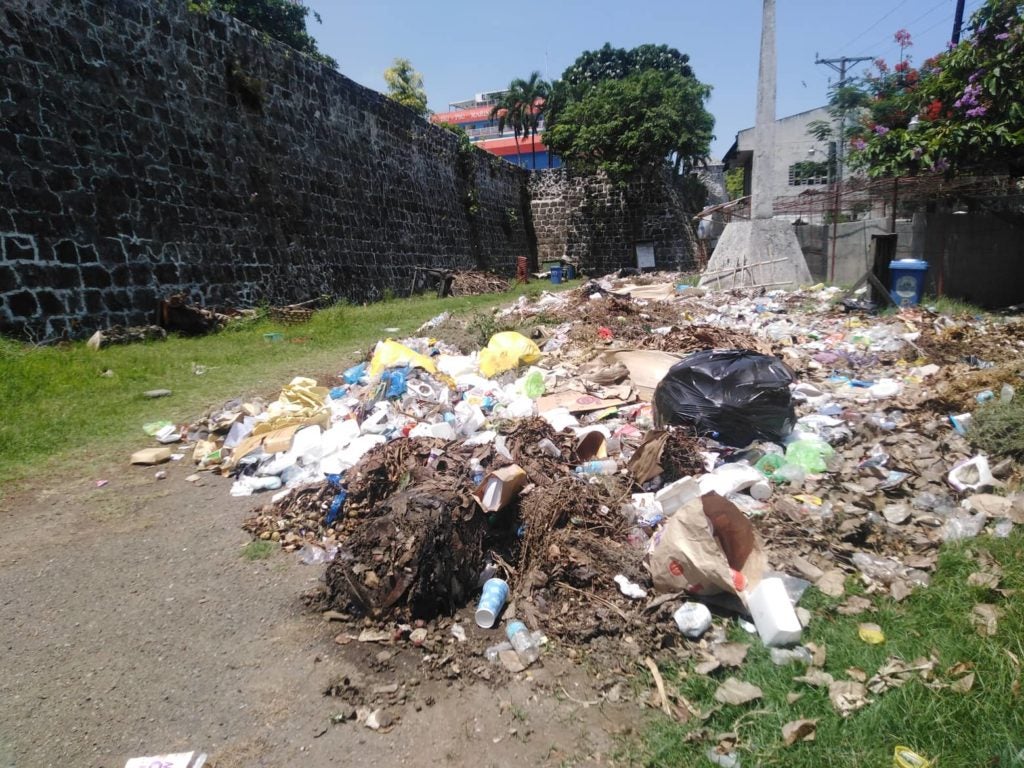 This is a photo taken around 11:50 a.m. on Wednesday, July 3, 2019 outside Fort San Pedro in Cebu City. CDND PHOTO / Delta Dyrecka Letigio

Mounds of garbage were dumped and uncollected outside Fort San Pedro located along A. Pigafetta Street.

Photos of the ghastly sight is making the rounds on social media platform, Facebook.

Engineer Joel Biton, head of the Department of Public Services (DPS), said he instructed the personnel in-charge for the city’s garbage trucks to collect the trash outside the heritage site.

Biton said the area where the garbage was dumped may not have been noticed by the collectors because it is located along the inner road of Plaza Independencia.

However, Biton noted that the garbage has to be removed because tourists frequent the area.

A security guard posted at Plaza Independencia, who requested anonymity, said this is not the first time that this area turned into a mini-dumpsite before garbage trucks collect the trash.

The issue was brought to the attention of Biton after Erwin dela Cerna, executive director of Fort San Pedro, posted two photos: an old photo that clearly presents a clean historical landmark and a recent photo where piles of garbage were dumped outside this Spanish-era structure.

Dela Cerna wrote that the fort has lost its beauty with the presence of the garbage in its vicinity.

According to Biton, they will need reports of these uncollected garbage since the DPS can only monitor garbage located on the main city streets.

Mayor Edgardo Labella earlier instructed the DPS to immediately clean the streets in the city after the mayor saw mounds of garbage on the streets on his way to the city hall on Monday, July 1.

In terms of garbage disposal, Biton said the city government has not yet decided to dispose garbage at the Binaliw landfill although private haulers, under contract by the previous administration, can choose to throw garbage at the landfill.

Services of the private haulers to Cebu City will end on July 10.

At present, the garbage is currently being dumped in transfer stations in Barangay Inayawan.

Biton said they are waiting for Mayor Labella’s go signal for DPS to utilize the services of the landfill.

Biton said they are looking for ways to ensure the garbage in the city will be collected on time. / celr