The Official Mayor’s Seal of Cebu City (left) was changed by former Cebu City Mayor Tomas Osmeña in 2018 with the new seal (right).

CEBU CITY, Philippines — Mayor Edgardo Labella was on his second day in the top executive position of Cebu City when his staff found out the mayor’s official seal was missing.

Aside from the seal, also removed were the tiles, toilet bowl and other fixtures inside the mayor’s office located on the 8th floor of the Executive Building.

They were allegedly removed when former Mayor Tomas Osmeña officially ended his term on June 30, 2019.

The City Legal Office has already filed corruption and theft cases against Osmeña and his men for the act, and the Department of Interior and Local Government (DILG) is investigating the case for legal charges against the former mayor for “destroying public property.”

But Osmeña’s lawyer, Lawyer Amando Virgil Ligutan, said the seal was not lost.

In a press conference last Tuesday, July 9, 2019, Ligutan said Engineer Mejilito Cajes of the Building and Maintenance General Services Office, the complainant of the case against Osmeña, took the official seal from the mayor’s office on June 25, 2019, 9 a.m. and was used in the podium of Labella during his inauguration on June 30, 2019.

Ligutan showed to members of the media a logbook “proving” that Cajes took the seal and, thus, lied in his affidavit when he filed the case at the Office of the Ombudsman.

The logbook stated that Cajes took the “official seal” to the legislative building on June 25, and was never returned.

However, Cajes, in a statement revealed to television station ABS-CBN, said the two seals are different and the one used in the podium is different from the official seal of the mayor.

Lawyer Rey Gealon, the City Legal Officer of Cebu City, said the seal that is lost is the “new” seal.

City hall records state that the mayor’s seal was replaced by Osmeña in 2018 although it is not clear if it was approved by the council. Gealon said an ordinance has to approve the new seal sponsored by the city council. 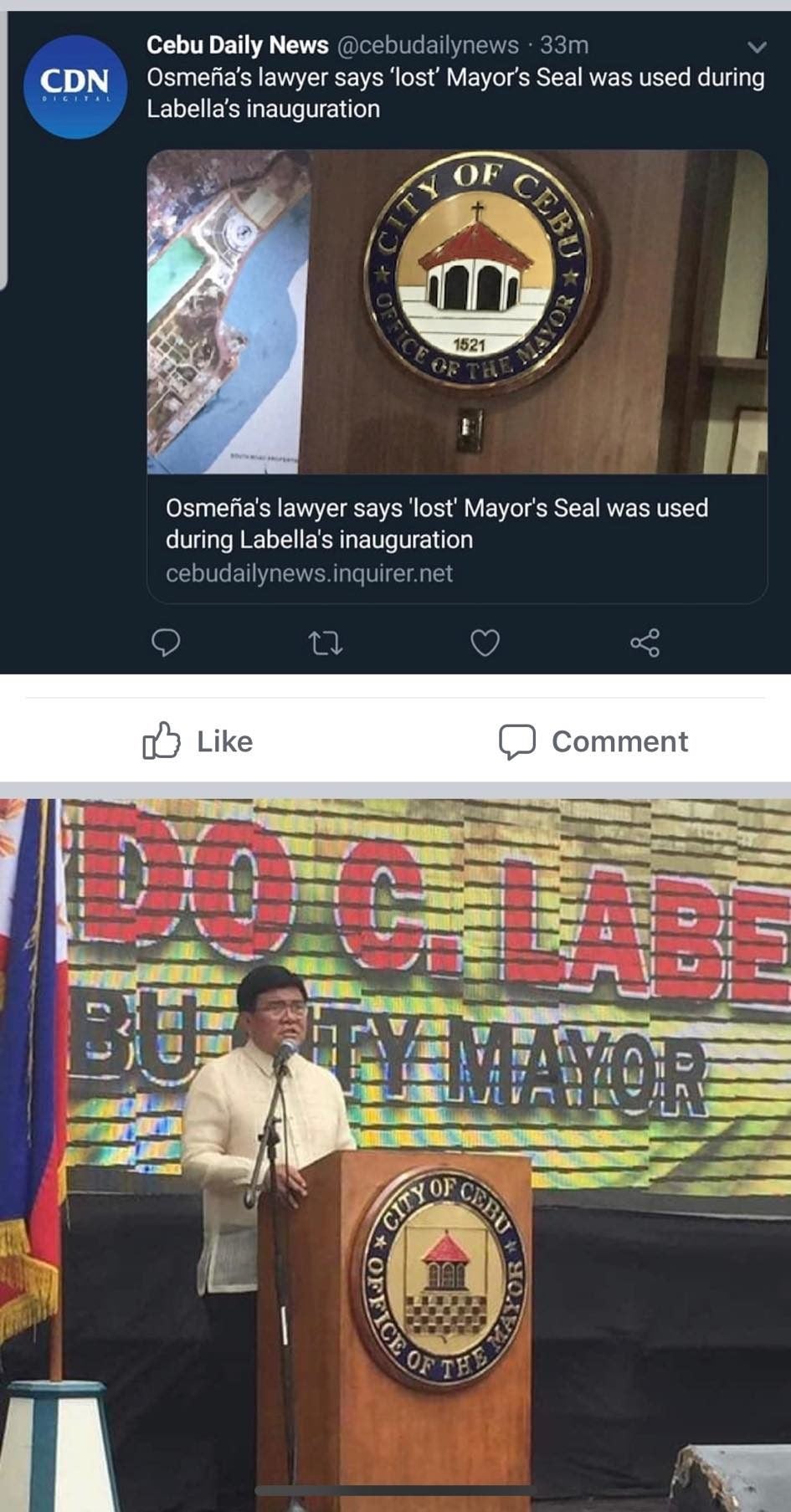 “It doesn’t need one to have a 20/20 vision to know the difference between the stolen official seal of the office of the mayor, appearing above, and the official seal used during the inauguration of Mayor Edgar Labella, appearing below,” said Gealon in a message to CDN Digital.

Gealon said there are visible differences between the two seals.

One is the year “1521” inscribed below the Magellan’s Cross symbol that is visible only in the new seal.

The new seal also has a broad depiction of the Magellan’s Cross with white color beneath it, while the old seal has a leaner Magellan’s cross maintaining the gold background.

The new seal also has a bigger inscription of the words “CITY OF CEBU”, while the old seal has a smaller print.

“Please, let us not mislead the people of Cebu and the Honorable Office of the Ombudsman, whose mandate is to protect the interests of the people,” said Gealon.

Gealon, in earlier statements, said the alibi of the Osmeña’s camp was a “weak defense” that will make it hard for the Ombudsman to believe. /bmjo

Read Next
Duterte: I ‘killed’ because I thought Arroyo liked it