Job regularization leaves tens of thousands out in the cold 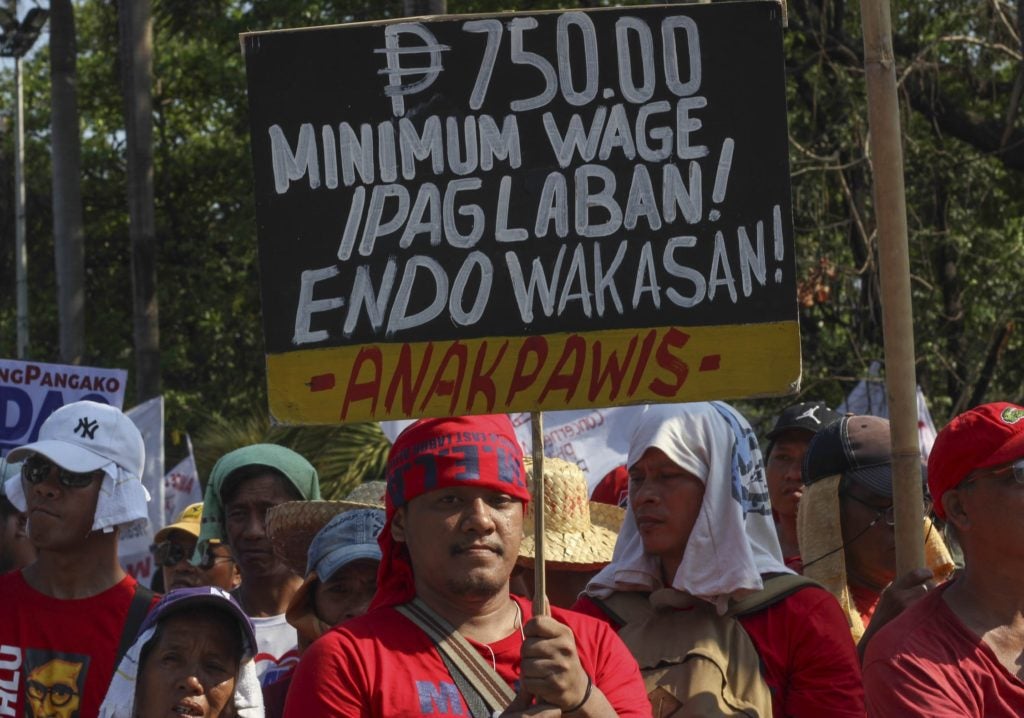 OB SECURITY Workers led by Kilusang Mayo Uno call on the Duterte administration to fulfill its promise of ending labor contractualization and to raise the minimum wage during a rally on May 1, Labor Day, at Liwasang Bonifacio in Manila. —EARVIN PERIAS

(First of a series)

In his heart, “Marlon” knew he had found the one. But work circumstances wouldn’t let him ask her to marry him.

Until a month ago, Marlon, 36, of Pasay City, had been working as a machine operator at a detergent and shampoo factory in Laguna province for the past eight years. “I stayed with the company that long, but I remained a contractual,” he said. “I have so many plans but they are taking a backseat for now.”

His live-in partner and coworker, “Myra,” 30, of Pangasinan province, also worked as a contractual “all-around” worker at the factory.

They said that they were hired through an agency, and that they had long hoped for regular status and security of tenure at work.

They also claimed that the tasks they were made to do at the factory were intended for regular employees.

“I was hired as a production helper, but I handled machine operation. It’s unfair because my salary did not compensate for the task that I did,” Marlon said.

“I was supposedly a production helper, but I ended up being an all-around worker doing almost all sorts of tasks I was assigned to do,” Myra said. “I was hoping to be regularized after six months. But the only thing that became regular was my being a contractual for almost three years.”

Worse, both of them, along with several others who had formed a union, were fired just last month.

Marlon and Myra are obviously not among the almost half a million contractual workers who, according to the Department of Labor and Employment (Dole), are now enjoying regular employment status.

According to Assistant Labor Secretary Benjo Benavidez, a total of 471,394 workers have been regularized by their employers since 2016.

A big bulk of this number became regular employees in private companies only last year following the release of President Duterte’s Executive Order (EO) No. 51.

“We take pride in this achievement,” Benavidez said, adding that no other administration had been able to do it. “It is unprecedented.”

“But of course, we also give credit to employers, trade unions and labor groups for doing their share,” he said.

Ending contractualization was among President Duterte’s campaign promises in 2016.

He issued EO 51 in the absence of a measure that would end the controversial labor practice. But the EO was heavily criticized by labor groups, which described it as “useless” for lacking a crucial provision declaring direct hiring as the norm.

Alan Tanjusay, spokesperson for the Associated Labor Unions-Trade Union Congress of the Philippines (ALU-TUCP), said that of the 500,000 regularization orders issued by the Dole, only around 200,000 employees had been regularized by compliance. He said other companies challenged the orders in court.

Tanjusay said the Dole “tried to shortcut” the regularization process by entering into an agreement with employers to voluntarily regularize their contractual workers in exchange for exemption from worksite inspection.

He was referring to the supposed agreement between the Dole and the Employers Confederation of the Philippines (Ecop) for its 3,200 member-establishments: to voluntarily regularize around 40 percent of their workforce, or an estimated 220,000 employees, until 2022

In exchange, the companies will be exempted from labor inspections until regularization is completed.

“This agreement was denounced by the TUCP and other labor groups as illegal and immoral and undermines existing laws and conventions, forcing the Dole to indefinitely postpone the bilateral agreement,” said Tanjusay.

At the losing end

Benavidez said the Dole was encouraging voluntary regularization not only because the agreement would make work easier for its “overloaded” inspectors, but also because Ecop could police its ranks.

“As much as possible, the Dole tries to avoid filing cases against companies because the department and the workers can’t litigate these cases all the way to the Supreme Court,” he said.

“At the end of the day, the workers are the ones at the losing end,” he added, citing the case of giant telco PLDT Inc., which the Dole haled to court last year for supposedly engaging in illegal contractualization and for refusing to grant regular employment status to its more than 7,300 workers.

To this day, Benavidez lamented, none of PLDT’s workers had been regularized as the petition for review of the case against the telco giant was still pending in the Supreme Court.

On the other hand, he said, the number of regularized workers could still increase, especially if the President would sign the pending bill on security of tenure (SOT), which seeks to impose additional restrictions for contractual work arrangements.

“We’re hoping that the President would finally sign it into law,” Benavidez said, adding that the measure would raise the workers’ confidence level.

He admitted, however, that contractualization would still be allowed under the proposed law, easing employers’ fears that the measure would do away with the work arrangement

The current version of the SOT bill still recognizes nonregular forms of employment such as seasonal, project-based, and probationary jobs, Benavidez said.

The bill, particularly the Senate version (Senate Bill No. 1826)  assigns employers and other employment stakeholders to indirectly determine jobs to be contracted out in its implementing rules and regulations (IRR).

“The bill allows businesses to determine which positions in their companies are directly operated,” he said, adding that employers would only be allowed to contract out jobs considered noncore.

But for the Federation of Free Workers (FFW), ending “endo” (end of contract) has been a failed promise.

Said Julius Cainglet, FFW vice president for research, advocacy and partnerships: “Whether President Duterte signs SB 1826 into law or not, endo will not end. There is an increasing number of vulnerable and precariously employed workers in the country. Nonstandard or nonregular forms of employment, or precarious employment, which include short-term work, agency-hired work, project-based work, seasonal work, casual work, [and] ‘5-5-5’ is on the rise.”

But apart from patting its back for accomplishing the regularization of some 500,000 workers, the Dole claims that the Philippine employment situation in general has improved.

Labor Secretary Silvestre Bello III said the positive gains could be attributed to the nationwide conduct of job fairs, which are among the government’s major interventions in getting more Filipinos employed, as well as in bringing down the unemployment rate.

“The improving employment situation of the country is the manifestation of the effectiveness of our employment facilitation services in getting more Filipinos employed,” Bello said in an earlier statement. “Also, more Filipino workers are now enjoying remunerative and stable employment with the strict implementation of laws that ensure the protection and security of our workers.

The April 2019 LFS also noted positive progress in the quality of employment as the number of remunerative and stable wage workers rose by 2.6 percent, reaching 26.7 million secured workers.

The number of underemployed people significantly dropped by 1.226 million, a 17.7-percent or 0.7-percent decrease from the 17.0-percent underemployment rate in April 2018.

Overall improvements in the underemployment rate were attributed by the strengthened employment facilitation and services of the administration, including the conduct of job fairs nationwide, the utilization of PhilJobNet, an online job portal for jobseekers, as well as the increase on the regional wages of employed workers.

Despite the decrease in the number of unemployed workers, underemployment remains a challenge with 1.001 million unemployed youth aged 15-24, according to the survey.

Said Bello: “The [Dole] will remain relentless in uplifting the quality of life of every Filipino worker and their families by strengthening our employment facilitation services and enhancing our social protection programs for our workers. We are also consistent in pushing for the passage of the security of tenure bill to stop all forms of abusive employment practices that continue to immerse our workers in a quagmire of poverty and underemployment.”

But Marlon and Myra, who now spend much of their time on the picket line and are trying to make do with the little they have left from their last wages, have yet to feel the supposed improved employment situation.

“We’re still hoping to get our jobs back. That’s what we’re fighting for,” Myra said.

Read Next
Sheryn Regis’ daughter, Lourdes: My mom tells me to follow my dreams