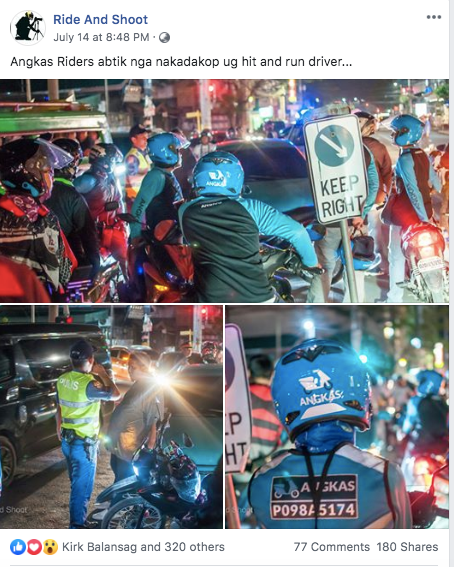 Cebu City, Philippines— A group of riders and photographers in Cebu shared on their Facebook page an incident that is inspiring a lot of netizens.

Ride and Shoot, a group of riders and photographers here in Cebu, posted on their Facebook page last July 14, 2019, photos of Angkas motorcycle drivers stopping and surrounding a fleeing hit-and-run driver.

“It was taken by one of our members Reynan Opada, who is a  professional photographer. It happened on July 12 at around 8-9 p.m. in Escario corner, Juana Osmeña Street. What caught Reynan’s attention was the courage and unity shown by the Angkas drivers who tailed the driver who was trying to escape from what he did,” said Marco Chavez, the head of Ride and Shoot.

In an interview with CDN Digital, Opada said that, from what he has heard from the people who were in the area, the driver of the car hit a motorcycle along Vicente Sotto and tried to escape. But he failed as he bumped into a center island along Juana Osmeña Street after being chased by some Angkas motorcycle drivers.

(The driver quickly removed his car from the center island and some motorist even helped him out not knowing that he was escaping from something. But the timing was right because the driver was cornered by the Angkas drivers.)

After a couple of minutes, the police arrived and took over.

According to Opada, he took those pictures because of the event’s unique circumstance. After all, it’s not every day we see things like this happen.

Read Next
Baron Geisler proposes to girlfriend in San Remigio