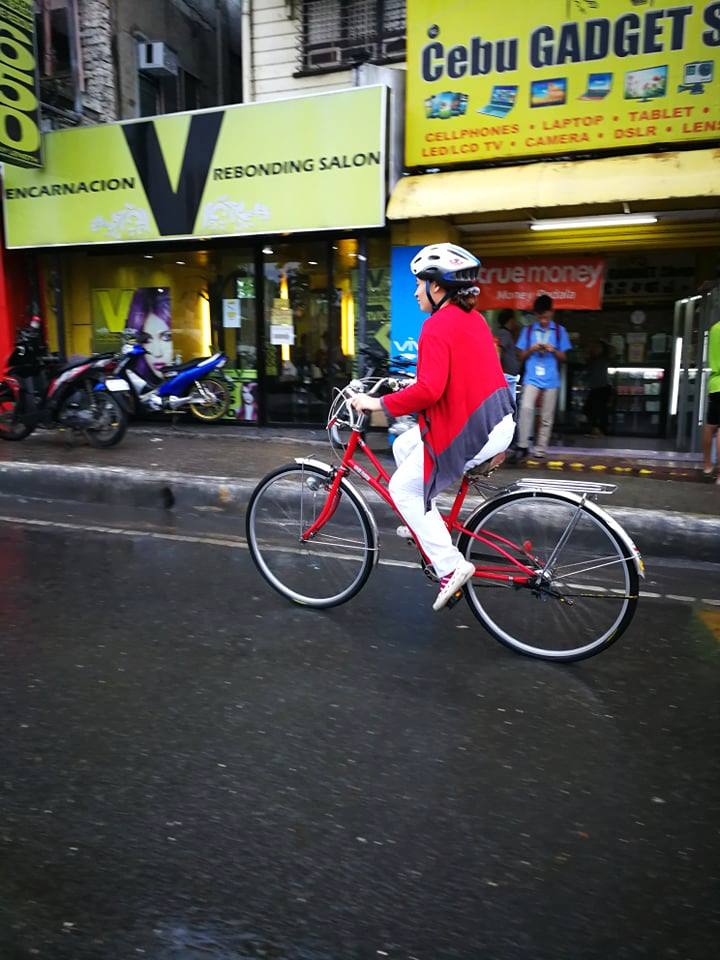 Meet Deena Lee Kelly, the mystery lady biker who wowed the online world of her courage to ride a bike to school amidst the bad weather to avoid getting stuck in traffic. /Contributed Photo: Tony Galon

CEBU CITY, Philippines— The mystery lady on a bike braving the weather and the traffic last July 23, is identified as a fourth-year veterinary medicine student.

Deena Lee Kelly, 24, was shocked when she saw a picture of her circulating online on board her bike on her way home from school.

“ It was literally the first thing my classmate showed me in the morning. I remember sir Tony’s wife (was) all smiles and making chitchat, I just didn’t know a post would follow too,” said Kelly.

Netizens were quick to praise Kelly because of her initiative to beat the traffic and brave the bad weather just to reach home and rest.

“Actually, I just started last Saturday, July 20, (I have) been biking since unless it’s raining when I leave my place so I don’t bike,” she said.

Since then she has been biking from her place in Tisa to her school in Urgello, saving her money and time.

Read more: Mysterious ‘lady on a bike’ shows us how to beat the Cebu traffic

“Biking has become more common through the years, and I do hope it becomes a daily routine for more students and employees. Fewer carbon emissions, and healthier people. There is no harm in taking jeeps, but don’t be afraid to hop on a bike to commute, it is addicting,” Kelly told CDN Digital.

She was influenced by what she sees online and that she would want to help save Mother Earth in ways she could.

Kelly also shared that it’s normal to be afraid because it was really scary and risky, but she kept praying for safety and just to always be vigilant on the road.

“I do hope that the post on CDN does inspire people, especially regular people like me who have school and work,” shared Kelly.

Kelly herself was really surprised to see a lot of people biking and exchanging smiles with her, making her want to stick to biking for her daily commute to her school and home. /dbs

Read Next
No lab gown? No problem for this marine engineering student in Cebu