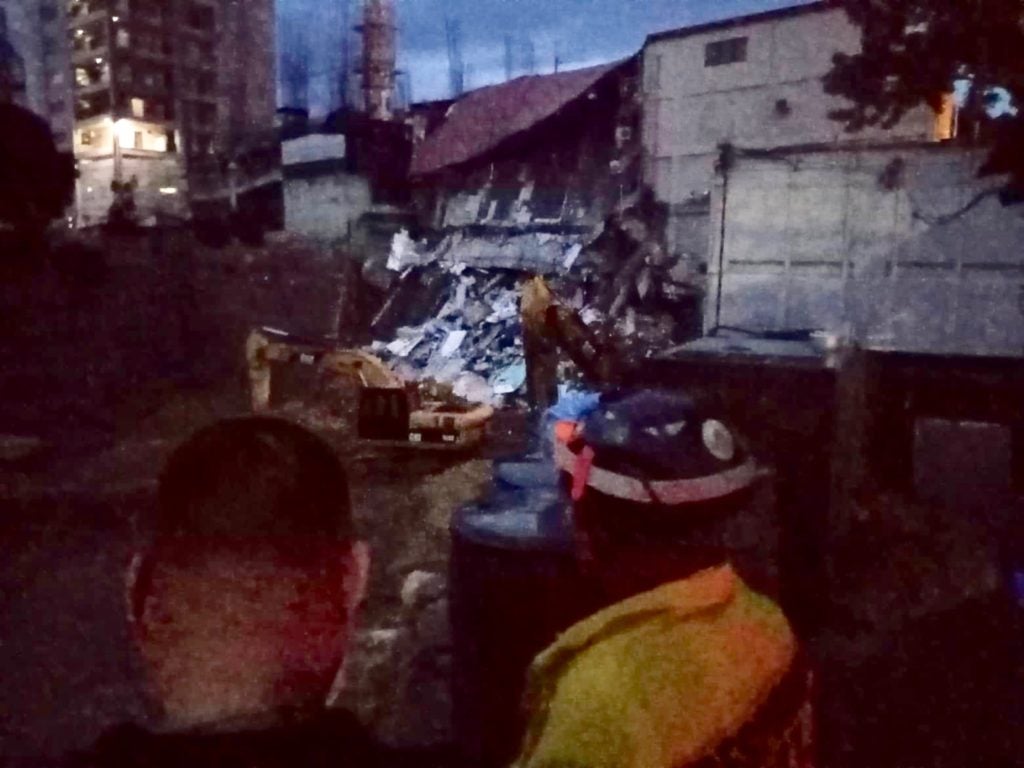 The scene where a portion of a building collapsed in Barangay Kamputhaw in Cebu City. CDN Digital photo | Benjie Talisic

CEBU CITY, Philippines –The Cebu City Office of the Building Official (OBO) said that the contractors of an ongoing construction of a condominium-hotel (condotel) in Barangay Kamputhaw in Cebu City promised to put up mitigation measures in their excavation site to prevent any further caving-in of the ground.

OBO head, Architect Florante Catalan, said in a press conference on Friday, August 9, 2019, that he met with the contractors of the 26-storey contruction developed by Vista Residences Inc., to discuss these mitigation measures on how they can strengthen the soil underground, before they can continue to build the foundation.

(Additional anchors will be provided to establish the slope protection work. After that, we will conduct an additional pull-out test to determine if the additional anchors are okay and are capable of supporting the area that was affected.)

Catalan ordered the developers and contractors to do the mitigation measures as soon as possible so they can return to the construction of the 26-storey building.

Only once the soil can already hold up and pass the pull-out test can the construction begin again.

Failing to comply with the additional anchors, the city government cannot allow the developers to continue with the construction in the area because the area has become a hazard to nearby structures.

“(It could take) days, depende nila kanus-a nila mahuman. Nagstart na sila. Magpaspas pud na sila kay dili na sila ganahan madelay. (It could take days, depending on how fast they work. They have already started. I expect they will work fast because they don’t want their construction delayed),” said Catalan.

Catalan mulls getting a geologist-consultant to check on the soil composition if it is capable to hold up a 32-storey building, but he said the priority would be to put up the anchors to prevent anymore caving-ins.

There has been no mention of whether the constractors of the 26-storey building can be penalized over the incident as investigation continues to this day.

In the initial investigation, the OBO said that a large volume of water exited when the drilling activities, which are part of the excavation, started last March 28, 2019.

The softened soil caused the back portion of the Juanita Building, which used to house the Social Security System office, to collapse. No one was injured in the incident.

While the contruction of the 26-storey building was ceased, the construction and repair of the Juanita Building was allowed by the city government.

Meanwhile, Catalan urged the public to report any building in the city that has been abandoned or proved to be a hazard in the area so the OBO can check them.

He also urged the barangays to report any illegal structures so these can be investigated by the OBO. /bmjo