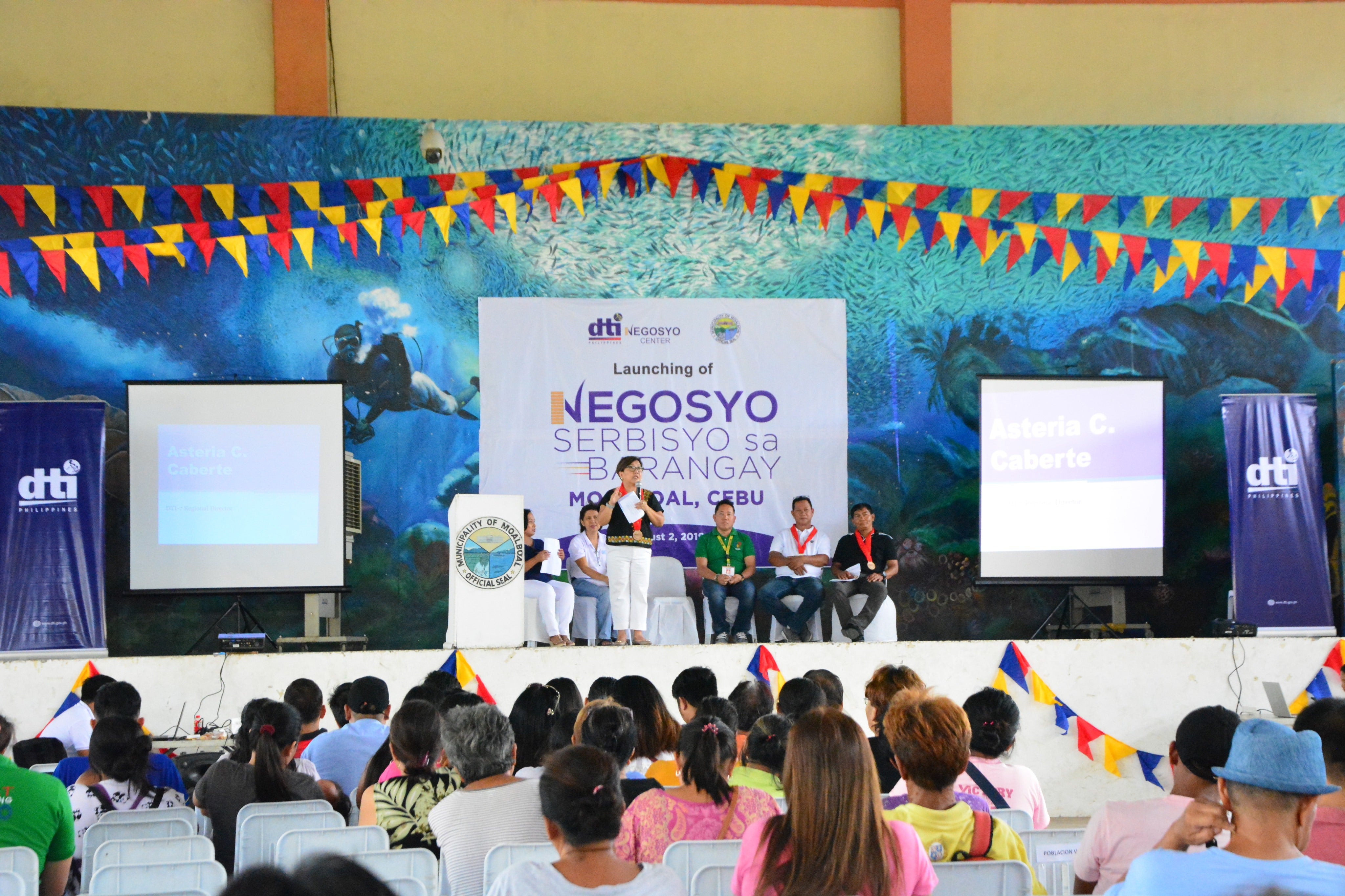 Dr. Asteria Caberte, director of the Department of Trade and Industry in Central Visayas (DTI-7), says they will extend more services to the barangays to encourage an entrepreneurial culture in the villages. CONTRIBUTED PHOTO / DTI-7

The Department of Trade and Industry (DTI) is extending its reach to the villages in a bid to bring government assistance closer to the countryside and encourage more barangay-based businesses and entrepreneurial endeavors.

This is made possible under the Negosyo Serbisyo sa Barangay (NSB) program that was rolled out in Cebu province last August 2, 2019. The program was kicked off in the town of Moalboal in southern Cebu, around 85.7 kilometers from Cebu City.

NSB is national flagship program of the DTI that is supported by Secretary Ramon M. Lopez, who was executive director of Go Negosyo of the Philippine Center for Entrepreneurship.

“We really want to intensify the awareness and dissemination of DTI programs and services at the barangay level, especially for those that have not received or heard of DTI and other government programs,” said Caberte.

She said DTI personnel will provide business development services to both existing and aspiring entrepreneurs in these barangays.

Related services can also be provided through the DTI Negosyo Centers.

A total of 44 micro and small enterprises from the 241 participants attended the NSB official launching at the Moalboal Sports Complex in Barangay Poblacion West.

The event was attended by participants from the three barangays of Moalboal town barely Basdiot, Poblacion East, and Poblacion West.

From 2019 to 22, DTI Cebu Provincial Office Director Esperanza L. Melgar said the NSB Program in Cebu Province will cover 288 barangays from 21 municipalities belonging to the fourth and fifth income classes.

The Cebu Province has 28 DTI-Negosyo Centers which will spearhead the implementation of the NSB program.

During the NSB kick-off program in Moalboal, DTI’s Small Business Corporation (SB Corp) presented the government’s Pondo Para sa Pagbabago at Pag-Asenso (P3) Program to provide microenterprises an alternative source of financing that is easy to access and made available at a reasonable cost.

Philippine President Rodrigo R. Duterte had earlier commended the DTI through SB Corp for the almost 86,000 MSMEs that have received over P3 billion worth of loans since 2017.

Emily Nuevo, managing proprietor of Emirich Bangus, said she learned valuable lessons with the seminar that are useful to a local entrepreneur like her.

Nuevo is a Mentee-Graduate of the Kapatid Mentor ME (KMME) Program, a nationwide Big Brother-Small Brother Mentorship Program for micro enterprises implemented by the DTI in partnership with the PCE-Go Negosyo and Cebu Chamber of Commerce and Industry (CCCI).

Nuevo also graduated from the the DTI-Cebu E-Commerce and Digital Marketing Mentoring program.

According to DTI-7,  the NSB roll-out was supported by 17 representatives from different government agencies who discussed services relevant to MSMEs.

The partner-agencies include the Bureau of Internal Revenue (BIR), Department of Agriculture (DA), Department of Labor and Employment (DOLE), Department of Science and Technology (DOST), Pag-IBIG, PhilHealth, Social Security System (SSS), and the Technical Education and Skills Development Authority (TESDA).