Buhisan Tunnels, Gochan Hill and the time to remember

Errata: Before I proceed with the gist of this article, let me make two corrections to my column last week. First, I failed to include the San Guillermo de Aquitania Parish Church of Dalaguete from the National Museum’s list of nominees for inscription either as National Cultural Treasures or Important Cultural Properties. I thank Engr. Abraham Donald Lara, the municipal engineer of Dalaguete, for pointing out this omission. The second one is the Magellan Quincentennial, which I inadvertently stated as Quadricentennial, despite previous columns mentioning it.

I am glad that Mayor Edgardo Labella won and like his counterpart in Manila, Isko Moreno, has cleaned up a lot of streets in downtown Cebu.

But how about those that were part of the city’s past but which are not in the historic and commercial core of the city? I am referring in particular to the tunnels that run beneath the hills of Buhisan as well the most historically prominent, Gochan Hill.

In 2015, I gave a tour to some eight American Vietnam War veterans belonging to the Americal Division and one military historian from the U.S. Naval Archives who came to Cebu to conduct a tour of World War II battle sites here. The Americal Division was assigned by Gen. Douglas MacArthur to liberate Cebu, an event that began shortly after 8 o’clock in the morning of March 26, 1945. 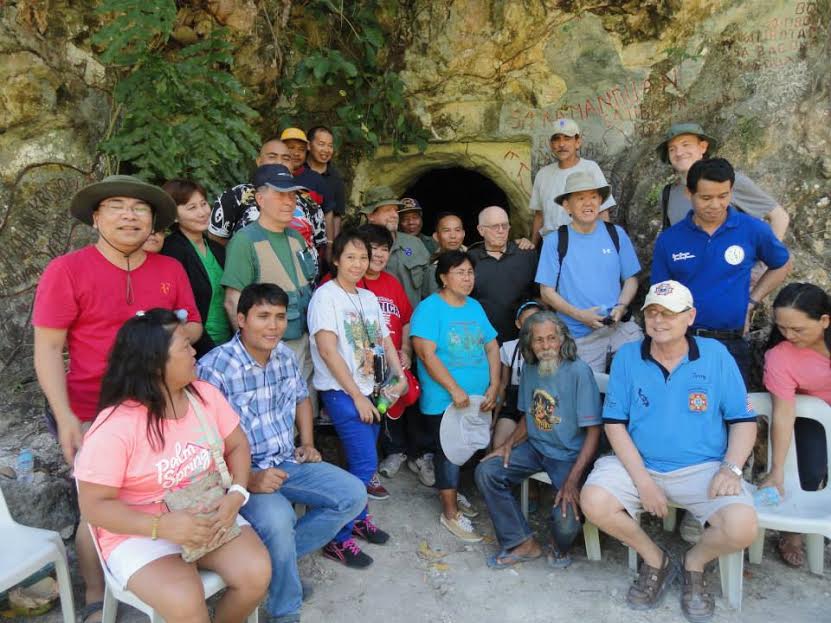 The American veterans together with barangay officials and property owners outside one of the tunnels at Buhisan in this photo taken in 2015 during a tour of World War II battle sites in Cebu. |CONTRIBUTED PHOTO

It took five months, however, before the Japanese finally surrendered on August 28, 1945 (or 74 years ago this month) in ceremonies held at Barangay Caduawan, Tabogon. And in those five months, battles raged at Buhisan and into Babag Ridge as Japanese forces retreated northwards.

Among those battle sites that we visited were some of the honeycomb-like tunnels constructed by the Japanese using Cebuano labor in Buhisan while we also managed to get a glimpse of the now-partially-covered tunnel below Gochan Hill. The latter was the scene of a very tragic phase in the battle for the liberation of Cebu City, where some 125 American and 200 Japanese soldiers were killed in a three-day battle to conquer this strategic hill, what is referred to in World War II battle maps as Hill 31.

Americal Division veterans climbing Gochan Hill with members of the Gochan family during a tour of World War II battle sites in Cebu in 2015. |CONTRIBUTED PHOTO

In the wake of our 2015 tour, Labella, who was vice mayor of Cebu City at the time, was quoted by the local newspapers as lobbying for declaring these tunnels as cultural and historic sites.

There are many more tunnels that virtually run beneath the hills of Busay, some man-made, others natural, which figured in the battles and skirmishes that ensued on Babag Ridge from March 27 to the eventual Japanese retreat to the north starting on April 17, 1945 or thereabouts.

I wonder what has happened from then on and I would like to keenly follow up on what plans the city has for the upcoming 75th anniversary of the Battle for the Liberation of Cebu next year. I do remember the Gochan family offering to the city the development of a mini-park at that section where the tunnel is located, just behind St. Francis of Assisi School in Peace Valley.

Perhaps now Mayor Labella can talk to the Gochan family and have the area cleared and a historical marker put there.  Note that during the 2015 tour, the veterans built and eventually unveiled a historical marker and monument at the surrender site in Tabogon, paid for by their own Americal Division Veterans Association, with no single cent from the national or local government there.

It is time for local governments to do their share. There are so many more battle sites in the city alone that two different World War II heritage trails of some kind, akin to the one in Hong Kong, can be made, complete with signages or markers explaining the significance of each spot or place. One trail ought to begin at Buhisan to Antuanga and the hills beyond, while a second one can begin at the IT Park (former site of the Lahug Aerodrome or Airfield) going up to Busay.

All it takes is for the Cebu City government to take the cudgels and work with the very few remaining veterans before all is lost. After all, what would life be today if not for those historic events that unfolded in 1945?

Now is the time to remember.