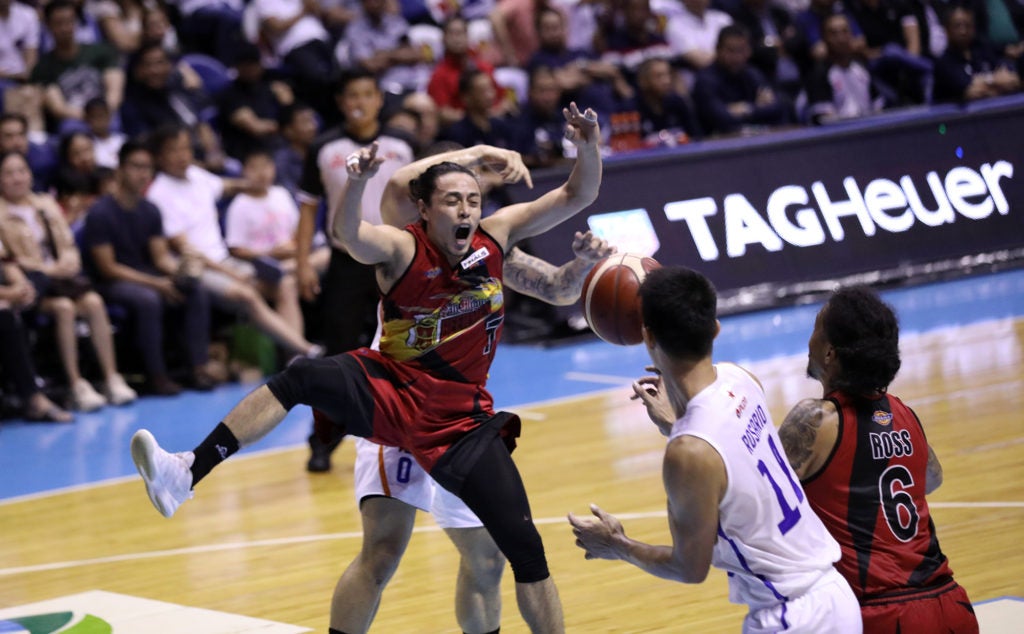 Getting more men involved offensively on Sunday night (August 11, 2019), San Miguel Beer took command late in the third period and held on in Game 4 of its PBA Commissioner’s Cup title series against TNT, effectively dodging the death blow while regaining psychological edge in the best-of-seven series.

Four men scored all but 16 of the Beermen’s total in a 106-101 triumph that knotted the series at 2-all before an animated crowd at Smart Araneta Coliseum, as June Mar Fajardo and Chris McCullough had the last laugh on a night they lost the conference’s biggest individual awards to TNT’s 1-2 punch.

McCullough had 27 points and 22 rebounds and Fajardo chipped in with 22 and seven as the duo delivered in the stretch that had the Beermen successfully thwarting a series of TNT rallies to grab momentum going into the critical fifth game on Wednesday night.

Alex Cabagnot had 25 points and Von Pessumal helped give twin towers Fajardo and McCullough space to operate underneath by finishing with 14 as San Miguel gave TNT a dose of its Game 3 medicine.

Two nights before Game 4, the KaTropa had their starting unit score all but four of their points in a 115-105 win.

“June Mar [Fajardo] was able to play comfortably inside, and that’s exactly what we needed,” said coach Leo Austria, whose defensive ploy also shut down RR Pogoy on the other end.

Chris Ross was the only starter who failed to finish in twin digits in scoring for the Beermen with seven, but he did account for eight assists and six rebounds that helped the San Miguel cause immensely.

“We didn’t want to be down 1-3, because that would really be hard to recover from,” Austria said.

Terrence Jones, who won the Best Import award, had 32 points and 16 rebounds for the KaTropa, whose two losses in the series came at an average of 3.5 points.

Troy Rosario scattered 24, while Jayson Castro, who won the Best Player of the Conference award over the 6-foot-10 Fajardo, chipped in with 17.