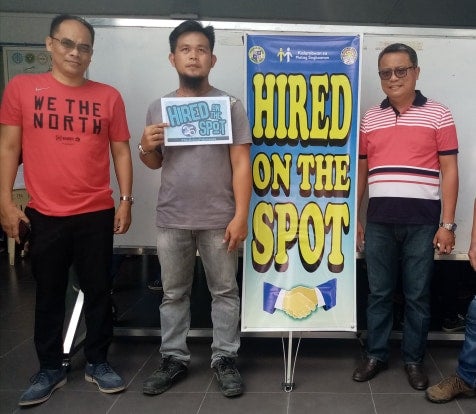 CEBU CITY, Philippines–Applying for a job for the first time, 28-year-old Prociso Iglesia could hardly believe it when he became the first hired-on-the-spot applicant at the ongoing local and international jobs fair organized by the Technical Education and Skills Development (TESDA).

The jobs fair held at the TESDA Compound along Archbishop Reyes Avenue in Cebu City was the highlight of the National Tech Voc Day celebration, a synchronized nationwide event observed by the national government agency.

Iglesia, a resident of Barangay Lamac, Pinamungahan, had been doing contractual welding jobs. But he decided to give regular employment a try during the ongoing jobs fair.

He completed the Technical Education and Skills Development Authority (TESDA) welding training program in 2013, but he opted to work on his own.

And on his first attempt, Iglesia, a holder of National Certificate Level II, got hired by a well-known construction company.

TESDA-7 regional director Andrew Bido explained that the National Tech Voc Day jobs fair provided an opportunity to graduates and alumni of their training programs to be matched with companies who have job openings.

According to Bido, they expect around 600 applicants to participate in the job fair.

Over 20 companies joined the job fair, including those engaged in construction, manufacturing and retail.

The DTI provincial office also conducted entrepreneurship seminars for those who wanted to go into business for themselves. | dcb