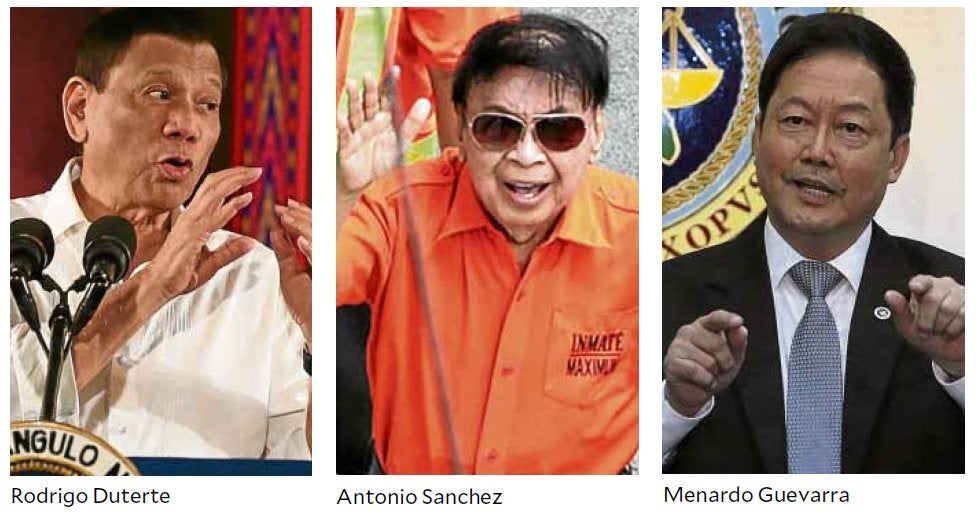 Go, the longtime presidential aide, said the President gave the order at the height of public outrage sparked by the announcement last week of the Department of Justice (DOJ) that the former mayor of Calauan, Laguna province, was among more than 11,000 convicts who would soon be released for good conduct.

Sanchez and six of his bodyguards were convicted in 1995 of the 1993 rape and murder of Eileen Sarmenta and the murder of Allan Gomez, both students of the University of the Philippines Los Baños, and were sentenced to seven 40-year prison terms.

The former mayor was later convicted of the 1991 murder of father and son Nelson Peñalosa and Rick Peñalosa, and sentenced to two 40-year terms.

Sanchez is serving his sentences at New Bilibid Prison in Muntinlupa City. He has served 26 years and must serve 14 more to complete 40 years, the maximum prison term allowed by law.

Go, speaking to reporters at Libingan ng mga Bayani in Taguig City during a National Heroes’ Day event, said the President gave the order to Guevarra and Faeldon not to release Sanchez on Wednesday night.

Guevarra said on Monday that he had received a “request” from Malacañang to stay any action on Sanchez’s early release.

“The request that I received from Malacañang was to hold the processing of Mayor Sanchez’s case until all the factual and legal issues have been fully threshed out,” Guevarra told reporters when asked about Go’s remarks.

Earlier, Guevarra suspended the processing of all prisoners’ good conduct time allowances under the retroactive application of Republic Act No. 10592, the expanded good conduct credit law for prisoners, ordered by the Supreme Court in June.

On Monday, he said the DOJ had given itself 10 days to complete a review of the guidelines for computing prisoners’ good conduct credits.

He said the DOJ would ask the Department of the Interior and Local Government to join the review since the two agencies jointly issued the implementation rules of RA 10592 in 2014.

At the height of public outrage, Guevarra and Faeldon clarified that Sanchez was not qualified to benefit from the application of RA 10592. The law excludes prisoners who have been convicted of heinous crimes, they said.

Go said the President reviewed the law on Monday and came to the same conclusion.

Presidential spokesperson Salvador Panelo, who was Sanchez’s lawyer in the Sarmenta-Gomez case, reiterated on Monday that he had nothing to do with the move to free the former Calauan mayor.

Panelo said he last visited Sanchez in 1998 or 1999, and that he had not seen the convict since.

He said he had sent a message to former Pasig City Judge Harriet Demetriou, who heard and decided the Sarmenta-Gomez case, to say that he had taken no steps for the release of Sanchez from prison.

In a television interview on Saturday, Demetriou criticized Panelo for defending Sanchez’s behavior in prison at the start of the controversy.

The public uproar generated by the move to free Sanchez showed the need for urgent reforms in the country’s justice system, Vice President Leni Robredo said on Sunday.

Speaking on her radio program, Robredo also stressed her opposition to the proposed revival of the death penalty, which gained further support after news broke last week that Sanchez would soon walk free.

“[His case] is proof that [the death penalty] should not be reinstated because those who are wealthy are the only ones who will benefit from it,” she said. “[T]he poor who have no means [to get] good lawyers will be at the losing end.”

The Vice President said a “complete overhaul” of the system was needed to ensure justice for all.

On Monday, Senate Majority Leader Juan Miguel Zubiri said he would introduce legislation that would explicitly ban heinous crime convicts from applying for commutation of sentence and for early release for good conduct.

“We intend to go back to work [on Tuesday] armed with possible amendments to [the] good conduct law by making it specific that convicts [sentenced for] heinous crimes … cannot avail [themselves] of the program. Period,” Zubiri said.

He said people convicted of murder, drug trafficking and kidnapping for ransom, and “other highly dangerous criminals” should be automatically prohibited from applying for good conduct time allowance under RA 10592, which amended the Revised Penal Code.

Told that the law already excluded heinous crime convicts from early release on good conduct, Zubiri said: “So let’s review why they were even considered by the [Bureau of Corrections]. How did it slip [past corrections officials]?”

Also on Monday, Sen. Panfilo Lacson questioned why Sanchez was apparently enjoying special privileges in Bilibid, as shown by his television interviews on recent days.

“Sanchez is just a representation of everything that is bad and wrong with our penitentiary system,” Lacson said.

“His luxurious, high living standard while serving time easily reminds us of the ‘kubol’ bungalows of the drug lord convicts, which authorities said they already dismantled,” he said.

“It appears that nothing has changed. The different money-making rackets remain and probably have [gotten] worse,” he added. —With reports from Dona Z. Pazzibugan, Jhesset O. Enano and Marlon Ramos

Read Next
Event Highlights Not To Miss at PHILBEX Cebu 2019