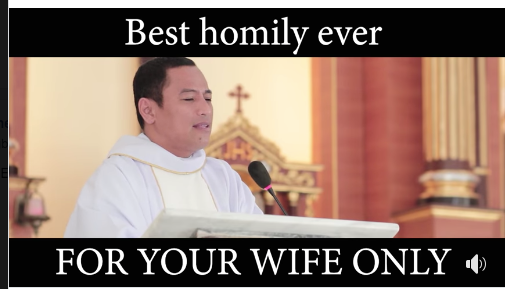 CEBU CITY, Philippines — There are times that priests cannot deliver their homilies effectively, causing parishioners sometimes to lose their attention and not get the message of the scriptures that the priests want to get across to the parishioners.

However, there are priests that can deliver a homily — one with a little humor, causing parishioners to smile or laugh a little and think or reflect about what the message is about.

This was what Fr. Adonis Madanguit gave during a Wedding Mass that he celebrated in Danao town in Bohol Province on April 27, 2019.

It was a homily for couples — an eye-opener for them especially to the wives.

A video of the priest giving part of the homily was uploaded by Harold Bonso Lansang, owner of Harlans Multimedia on August 24, and it has gotten a lot of wives’ attention online.

Some described the Madanguit’s homily to be the “best homily for wives.”

In the video, he started by saying that every time he would preside over a wedding ceremony he would make it a point to always preach this homily.

The homily is about what is the best thing a couple can do for each other and for the wives out there to always pay attention to their husbands’ actions.

“Just give what is the best, buhata ang pinakamaayo nga makapalipay niya (Do the best thing that can make him happy), and the best thing to give is by touching, paghikap, paggakos og paghalok (to touch him, to hug him and to kiss him),” said Madanguit.

For the husbands, he gave this advice:  “By simply touching your wife, you give her the sense of feeling that she still  gets your attention, that you are still into your wife and still feel the butterflies in your stomach just like the first time you and your wife held hands.

(This is a sign of attention and love that one can give each other. If he or she would not hug you or kiss you, then that means that the person does not want you anymore.)

The homily went on for six minutes and eighteen seconds, and as he progresses through preaching his homily, you can hear the laughter and the reaction of those attending the wedding.

“The people around the church were very carefully listening, and they were really happy [about the homily],” said Lansang.

Fr. Madanguit even said in jest that how lucky husbands were for having wives for them to touch, kiss and hug, unlike him, he had no one to hold hands with or kiss with because it was part of his life and service to the Lord.

So, to our dear husbands, always remember to touch your wives every day, give them a kiss or a hug or give them both, it is much cheaper than buying them a make-up gift in the end. /dbs