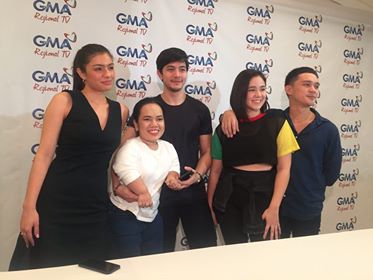 CEBU CITY, Philippines – “I am very happy that she accepted the role.”

This was the reaction of Asia’s Multimedia Star Alden Richards on working with former Cebu-based beauty queen Cynthia “Thia” Thomalla in a new television series, “The Gift.”

Richards together with the cast of “The Gift” including Thomalla, Jo Berry, Mikee Santos, and Mikoy Santos were in Cebu City on September 12, Friday to promote their new series in Danao City and Talisay City, respectively.

The Kapuso actor likes the working attitude of Thomalla and he can see how the new actress works hard for her role.

“I see the passion that she really wants to deliver her role. I guess diyan nagsisimula ang buhay as an actor,” he said.

(I see the passion that she really wants to deliver her role. I guess that is where the life of an actor will start.)

Thomalla is Richards’ newest leading lady in the upcoming series, “The Gift.”

The Kapuso actor will play as a visually-impaired vendor in Divisoria who will be blessed with the gift to perceive past and future events.

“She (Thomalla) is doing well. Ang raw niya every scene and it is a breath of fresh air,” he added.

Asia’s Multimedia Star also hopes that Thomalla will learn more in their upcoming television series and appreciate how colorful is the life of an actor.

Thomalla will play Faith, dubbed as “Princess of Dvisioria” and one of Richards’ leading ladies in the series along with Santos. She studied Business from the United States of America (USA) and comes back in the Philippines to take over her mother’s store.

It is a dream come true for Thomalla to work with one of the great artists in Kapuso Network. The former Sinulog Festival Queen 2016 is all praises to Richards whom she considered as one of the reasons why she wants to become a better actress.

“When I met him, sobrang humble at sobrang down to earth Niya,” she said.

Thomalla revealed that she auditioned and cried because of joy when she learned she got a role.

“I was overwhelmed and at the same time, I felt super blessed for the opportunity. I did not expect this but I am determined to do better,” she added.

“The Gift” is Thomalla’s first television series since she inked a contract with GMA Artist Center in 2018.  This is directed by LA Santos which will premiere on September 16, Monday.