MCWD Board explains side to Cebu City Council 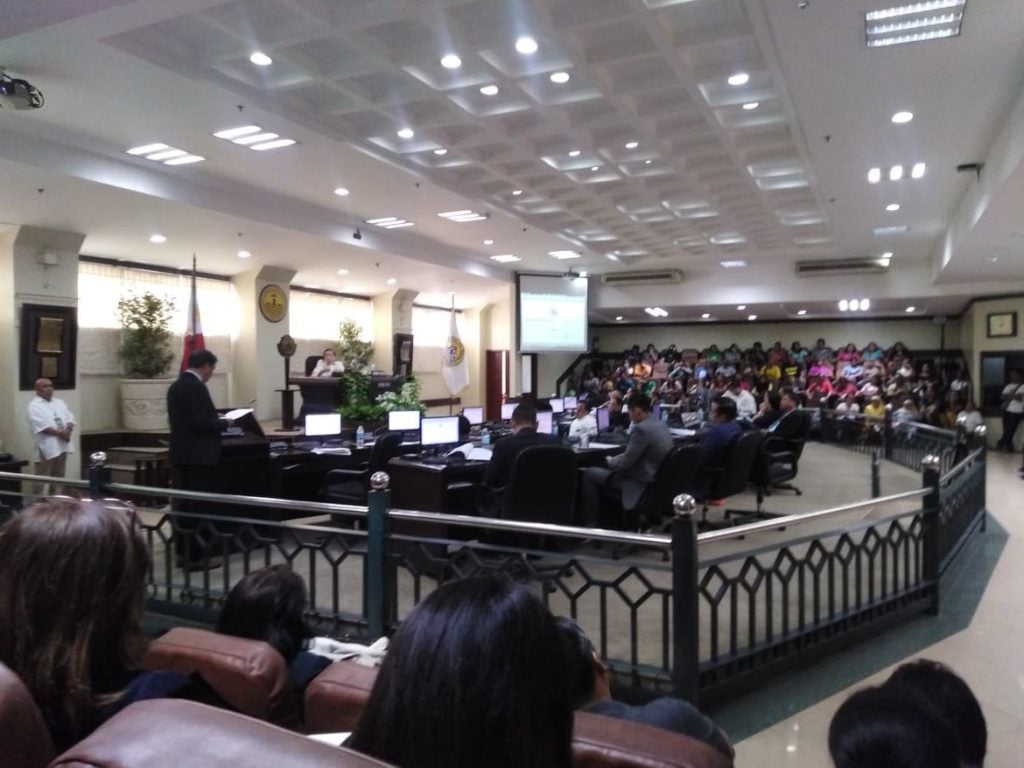 The Cebu City Council probed the Board of Directors of the Metropolitan Cebu Water District over the lack of water supply in the metro. | Delta Letigio

CEBU CITY, Philippines — Only four of five members of the Board of Directors of the Metropolitan Cebu Water District (MCWD) faced the Cebu City Council on Tuesday, October 1, 2019, during the council inquiry on the lack of water supply in Metro Cebu.

This, despite the warnings of Mayor Edgardo Labella that he may dismiss the Board of Directors of MCWD following various complaints for the lack of water supply in the Metro.

Chairman Joel Marie Yu could not attend the inquiry because he was on a scheduled trip abroad. The City Council’s invitation only came a week before the scheduled session.

Yu’s absence irked some of the councilors, including presiding officer, Vice Mayor Michael Rama, who said the chairman should be ready to face the public, especially now that MCWD is under fire.

Despite the absence of the chairman, the four board members faced the council’s protest on MCWD’s lack of “concrete” solutions to the water problem in Metro Cebu.

Sevilla explained to the council the reasons for the lack of water supply is the population boom of Metro Cebu, over extraction of groundwater, the saltwater intrusion, the nitrate contamination of groundwater wells, and the moratorium against drilling for groundwater, limiting the supply of water by MCWD to 250,000 cubic meters a day.

This is a far cry from the daily demand of consumers for 500,000 cubic meters per day.

Sevilla said the rise in population or residents, businesses and industries in the last decade made it impossible for MCWD to catch up with the demand for water supply.

Saying they are aware of the threats to groundwater depletion due to its capability to monitor groundwater levels and nitrate and saltwater presence, MCWD limited its extraction to 170,000 cubic meters per day, which should have been well below the groundwater balance of 370,000 cu m per day.

Aside from overextraction, groundwater wells are also threatened by saltwater intrusion and nitrate contamination, which is brought about by nearby bottomless septage tanks buried underground.

Sevilla said they had shut down nine wells for nitrate contamination and a few for high chloride levels despite the high demand for water.

Finally, MCWD could not drill for more groundwater wells in some areas of Cebu City because the National Water Resources Board (NWRB) placed a moratorium or no drilling policy were placed in these areas.

“So what is our direction in MCWD? We are now going to surface water. We will maximize our river systems, if we can tap them, we will,” said Sevilla.

Aside from the rivers, MCWD received a proposal from a private entity for a 100,000-cu m per day desalination plant with a selling price of P80 per cu. m. excluding taxes.

The MCWD told the Council that they need legislative intervention to stop the NWRB from releasing permits to private drillers in Cebu City to drill their own wells because these wells can compete with the already minimal supply of MCWD.

They also urged the council to implement the ordinances for water catchments in all structures so rainwater can be collected.

For the part of the Council, Vice Mayor Rama said they will urge the city’s executive to implement the local ordinances for the water catchments, and they will also write to NWRB to express their objection on releasing permits for private drillers to extract groundwater in Cebu City. /bmjo