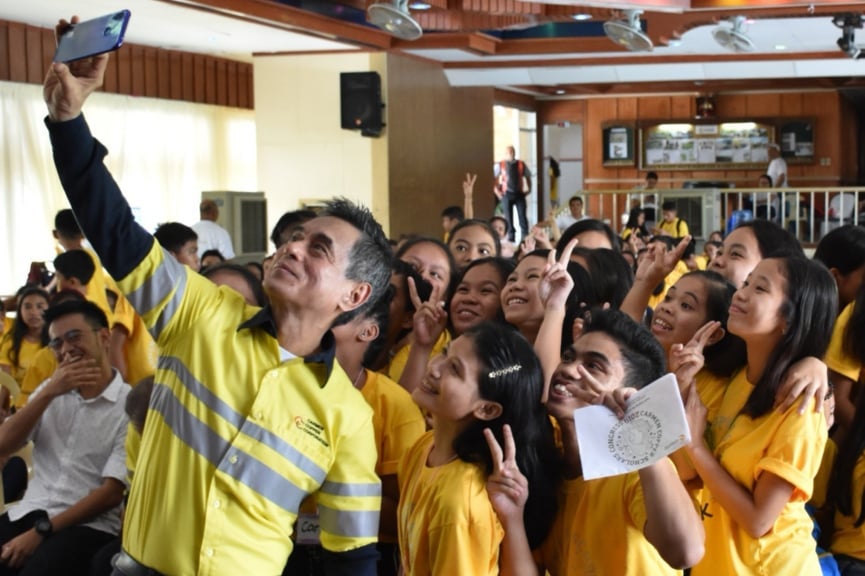 TOLEDO CITY, Cebu – More than 350 students took the challenge to become agents of change as they embrace their role as responsible stewards of the environment that everybody shares and owes to the future generations.

Carmen Copper Corporation scholars gathered during the recently held Scholars Congress with the theme, “Youth shaping the community we need.”

The whole day of learning and team building activities equipped the scholars with takeaway lessons for their personal growth. The congress was a call to action for these young people to initiate and take active part in community building – one step, one community at a time – aligned with Carmen Copper’s goal to build self-reliant communities in Toledo City.

“You represent the future and the hopes and dreams of this generation. You have the power to change and that change must come now. If you can change for the better by even just a tiny, unnoticeable bit every day, the future is clear and bright,” said keynote speaker and Carmen Copper President and CEO Roy O. Deveraturda.

Deveraturda shared his journey from being a homeless boy to becoming President and CEO of one of the largest producers of copper in the country today.

He told the scholars that perseverance and resilience are his guiding principles to overcome great odds.

“So my dear scholars, keep on dreaming. Don’t be mindful of your past, except to learn lessons. Like me, prove that living in poverty, living in pressure can be an opportunity for you,” he added.

As students and young leaders, Carmen Copper scholars are expected to use their full potentials and creativity in addressing the challenges and needs of their respective communities.

First year Aircraft Maintenance Technology student Myfel Jaeia Fuentes was a student leader back in high school and has been involved in various volunteer and civic activities both in school and the barangay.

Fuentes, 19, believes that as a young citizen, it is her duty to contribute to her community by actively participating in the Barangay Anti-dengue Taskforce in Barangay DAS where they do awareness campaign on dengue prevention and control.

“In this generation of people who focus on things that do not matter, on things that are unbeneficial to them like partying, drugs, vices, and other distractions, I want to spread the Gospel,” Lauron said.

Lauron lost her father in an electrocution accident when she was 5 while her mother succumbed to brain tumor in June 2018. That was the time she almost broke down from depression, but found her peace and healing with the Lord.

Carmen Copper Corporation, through its Social Development and Management Program (SDMP) invested on the education of 359 children from poor families in Toledo City for academic year 2019-2020.

Apart from academic scholarships, the company also provided technical vocational trainings to out of school youth and unemployed residents of its communities, many of whom have already gained employment and built classrooms and covered courts and improved school facilities to promote quality and inclusive education. / dcb