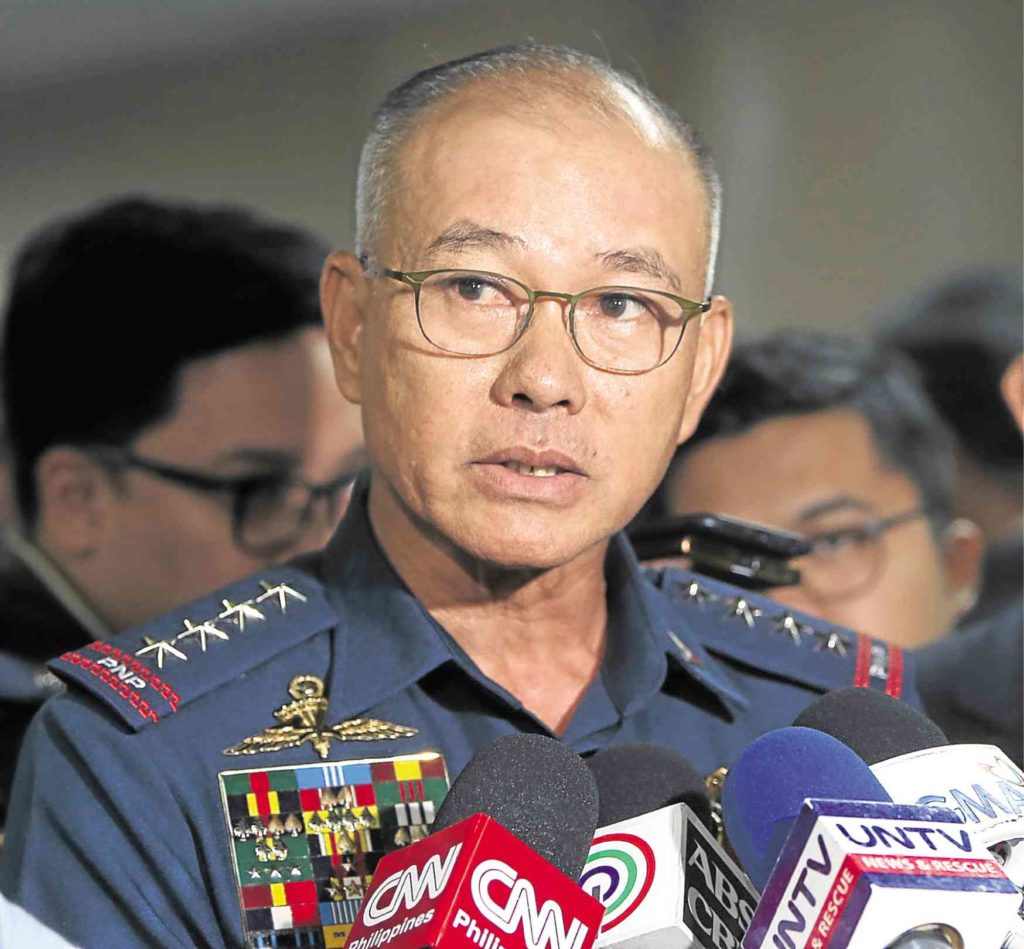 MANILA, Philippines (Updated) — Philippine National Police (PNP) chief Gen. Oscar Albayalde stepped down from his post on Monday, as the investigation on alleged drug recycling in Pampanga province in 2013 further heats up.

“After careful thought and deliberation, I have come to the decision to relinquish my post as Chief [of the] PNP effective today and go on a non-duty status. I have submitted my letter of intent to Secretary Año which he accepted and favorably endorsed to the President,” he said in a speech before PNP personnel during the flag-raising ceremony at Camp Crame.

“Since I am retiring compulsory on November 8, 2019, this will pave the way for the appointment of my replacement should the President so desires,” said Albayalde, who was supposed to finally hang his police uniform when he reaches the mandatory retirement age of 56 on that date.

Albayalde said he spoke with Interior Secretary Eduardo Año over the weekend regarding the Senate investigation on the questionable anti-drug operation in Pampanga in 2013, when he was its provincial police director.

But during his speech, he reiterated he was not involved in the alleged irregularities in the said police operation.

Albayalde, who was placed at the helm of the police force in April 2018, then thanked all the personnel of the PNP for their “hard work, loyalty, and dedication to the service,” and for helping him face the challenges and achieve his objectives during his term as PNP chief.

“My last command as Chief [of the] PNP is for you to carry on in the service of our fellow Filipinos so that all of us may live and work in peace. Do not let these challenges demoralize or stray you from your path,” he said.

“And above all, I thank God Almighty for this once in a lifetime opportunity to have led as the 22nd chief of the Philippine National Police,” he said.

Several officials including former Criminal Investigation and Detection Group chief and now Baguio Mayor Benjamin Magalong said during Senate hearings on the so-called ninja cops that the PNP chief — in a call made to Philippine Drug Enforcement Agency chief Aaron Aquino — had tried to intercede for the dismissal of the charges filed against his men who conducted the Pampanga drug raid.

Another official, retired police general Rudy Lacadin, testified that the PNP chief had also called him regarding his investigation into the 2013 raid, and had told him that Albayalde “got just a little” from that operation. With a report from Leila B. Salaverria, Inquirer /je