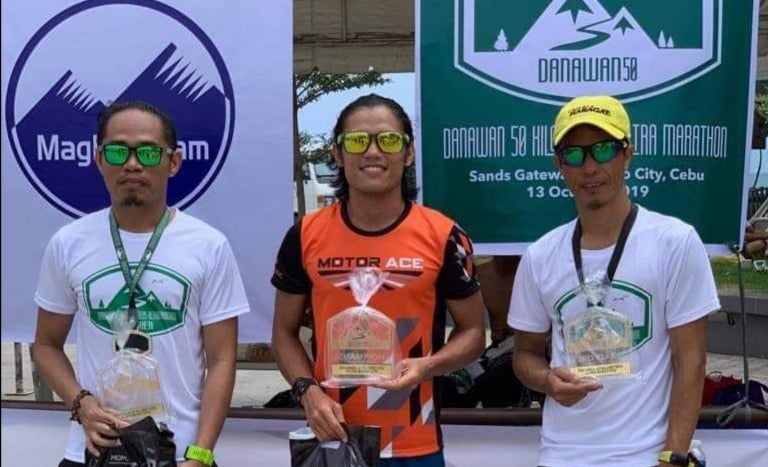 CEBU CITY, Philippines – Olympic marathon coach John Philip Dueñas has added another item to his long list of accomplishments by clinching the title of the Danawan 50K Ultramarathon on Sunday, October 13, in the City of Danao in northern Cebu.

Dueñas of the MotorAce Team completed his first ever 50-kilometer race with a time of four hours, 25 minutes and 53 seconds (4:25:53).

“This is for myself. A dream for myself. I want to improve myself as an athlete apart from being a coach,” said Dueñas.

From now on, Dueñas that he will already be dedicating 80 percent of his time to being an athlete and 20 percent to being a coach.

Still, Dueñas was able to dominate in triathlons where he finished third in the first-ever full Ironman that was held in the Philippines last year.

He also did his first Spartan race, an Obstacle Course Racing (OCR) competition via the Spartan RD Hill Super/Sprint 2019, last July where he finished second in the male 30-34 age group.

The 50k Ultramarathon, according to Dueñas, was part of his preparation for the Spartan Race PH Alviera in Pampanga that is scheduled on October 26 and 27.

Dueñas said that he is also vying to qualify for the National Milo Marathon via the Cagayan de Oro leg in November.

All these, Dueñas said are part of his preparations for next year’s full IronMan that will be held in Subic where he aims to finish higher with a sub 10 hours target.

In the Danawan Ultramarathon, Dueñas was almost one hour ahead of Ranie Kiamco who settled for the second place with a time of 5:24:00.

Salvaging the third place was Roel Villamor who came in at 5:45:45.

In the distaff side, Noriebelle Bacusmo took the title with a time of 6:57:47. Finishing second and third, respectively, were Fe Hoffner Vin Styggenein (7:25:14) and Jasmine Capangpangan (8:45:07).

The Danawan 50k Ultramarathon 2019 was organized by Boying Milan. / dcb