Tanod from Barangay Tabunan clarifies, ‘I am not a rebel’ 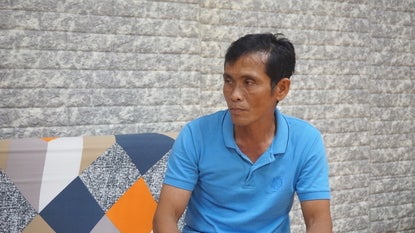 Alejo Pador clarified that the carbine was owned by his deceased father, Magencio, who used to be a member of a local group called “Kadre” that existed in the 1980s and that used to fight against rebels who proliferated in the mountains of Cebu City. CDN Digital photo | Raul Tabanao

CEBU CITY, Philippines –The chief tanod of the mountain barangay of Tabunan in Cebu City has clarified media reports tagging him as a “rebel” following his turnover of a M2 Carbine automatic rifle to the police.

Alejo Pador, 55, clarified that the carbine was owned by his deceased father, Magencio, who used to be a member of a local group called “Kadre” that existed in the 1980s and that used to fight against rebels who proliferated in the mountains of Cebu City.  The group consisted of farmers who rose to arms to protect their families and communities from rebel attacks then.

When Magencio died in 2006, Alejo said that he kept the firearm being the eldest of Magencio’s six children.

(I never used the firearm. I merely kept it an home because it was something that came from my father.)

Alejo said he was hurt by media reports referring to him as a rebel who was among those arrested for the possession of high-powered firearms in recent police operations.

(If I was arrested, I could have been detained by now.)

Alejo told CDN Digital that the “rebel” tag against him has also hurt his wife, Conchita, 56, and their three children aged 32, 23 and 21.

Even their relatives in Bukinon have been sending him text messages recently to verify reports tagging him as a rebel.

(It is not also fair to refer to me as a rebel,” he said.

Since his father died in 2006, Alejo said there was only one instance where in he brought the carbine outside of their residence.  This happened shortly before the May 2019 election, when a group of men who appeared to be drunk stoned their home in Barangay Tabunan.

(I went after the group of drunk men and i carried the firearm with me.)

But he never caught up with the group.

(Maybe someone saw me carry the firearm then, the reason why it was brought to the attention of the police.

He recalled that policemen visited their home sometime in August to ask about his unlicensed carbine.

Alejo said he admitted to keeping the firearm at home. He told the police that he will voluntarily surrender said firearm to the police detachment located in the neighboring barangay of Pung-ol Sibugay.

The next day, he visited the Sibugay detachment to surrender the carbine. He was accompanied by Tabunan barangay captain Nerio Pador, a relative, and Councilor William Radana, head of the barangay’s peace and order committee.

Alejo said that two other Tabunan tanods also voluntarily surrendered unlicensed firearms that they possessed then.

It came as a surprise to him why he was tagged as a rebel who was arrested by the police in media reports.

(I pains me to be tagged as a rebel.  My father used that carbine to keep rebels and now I am the one accused of being a rebel.  That is insane.) /bmjo